What do you think Painting Pictures album? Can you share your thoughts and listen experiences with other peoples?

Saying this is hip hop is disrespectful to the industry. Just stop.

Worst rapper of all time tbh

Pattycake definitely was my favorite song

I love Kodak & I loved that he was one of the few who didn’t make his listeners pay to play his music. Now when I search him up the songs are censored and you have to pay for some songs that aren’t out. I’m on a budget & smoking and listening to music is the way I spend my time. Please Kodak make it free😩

This is amazing. Totally real and unfiltered. I’m a huge Kendrick Lamar fan and Octave is really starting to peak my interest. This is a stellar effort.

horrible music from a horrible person. not surprised.

Kodak is a god

Album Of The Year!

this album is amazing Kodak=GOAT you my idol

Quueeesoooo11 - The Even More Best Album in The World!!!!!

We need some new albums even more!!! I am super 😃😃😃 awesome, I heard "Double Vision" and "Patty Cake" many times.

Why does this generation support this garbage? Especially guys like Kodak who are awful, disgusting people in real life smh 😂

Wayne and Kodak are on the same level

This is one of his better albums

Kodak makes me feel what he's gone through and how he emulates his life in his songs. 🔥🔥🔥🔥🔥 1️⃣8️⃣0️⃣0️⃣

I said it once and I'll say it again Kodak Black is pure TRASH!!!

All the songs are fire🔥🔥🔥

I find it pretty decent overall

Kodak's music is an acquired taste that caters to a very specific audience. If you don't like it, don't listen to it lol...

Most trash rapper in the rap game by far

Laptop nerd890 - Never Judge a book by its cover!

Being a 34 year old female with a teenage son, I try to stay hip to all upcoming eras so I can have some understanding of what my child engages in. First reaction Kodak what? Kodak who.... but after listening to this album and also doing research. I believe he is one talented artist but the lack of.... that was never provided to him made him the cause of his own demise in all negative situations he's been in... I am proud of the strength and courage he posses to even face the world after being accused of rape (which in my heart I feel he didn't do) keep growing and progressing but also remember you are idolized by many so try your hardest to make better decisions! Great album.... I like it! 🔥🔥

Best mfn album out on the tunes cop this mug if you really wanna listen to some good music Kodak G'd up like always sniper gang! Best almun really loved it !

If you dare say this album is trash you're probably old as hell or you just didn't bother to listen to the content. The production on the album is crazy and Kodak executes almost every song. Drakes more life was the only other hip hop album to sell more in the first week. Kodak must be doing something right. So stop misleading people with these horrible reviews and let them listen for themselves.

I couldn't imagine that anyone on this planet calls this music !

Will never buy his music (sincerely, a black woman)

kodak is hard i love his raps yuh 🤙🏽

STOP MUMBLING JFC - MY NAME SAYS IT ALL

This is a five star album. I love every single song. Corrlinks and JPay is my favorite song. I've listened to this album too many times.... I know all the lyrics... KODAK PLEASE GO ON TOUR AND DO MEET AND GREETS!!!!

The beats and production are really good but Kodak's annoying voice is too unbearable I can't listen to this.

Horrible. Not a fan.

Littleman 700 - One star because I can't give it zero stars

Must I even write a review analyzing this trash? Cmon people, anyone with an IQ above double digits who has an appreciation for music will understand why this is absolute trash. Absolutely no talent.

Kodak is trash why do people enjoy his music?

Best album of the year

Up in here, U ain't Never, Patty Cake and Tunnel Vision are great the rest is crap

Kodak is a good artist, has had problems in life but all I gotta say is this album is fire🔥🔥🔥

Just trash! Nothing good about this artist.

Im sorry but this just bad

There he go and Tunnel Vision were the only dope songs, everything else sounds the same

mkeymer - Cant give no stars unfortunately

Everybody makes terrible 'mistakes', he r*ped someone, y'all actually bought this album.

is this what we call music today? i could make these beats for free on one of the many music making apps available, and i could slur my speech and spout out vulgar language too. that doesnt make it talented

I was surprised of Kodak's talent. Foreal, l can really vibe and hype to it. Like it.

garitan - Music is average but...

#freekodak he could've got more bangers on this b

This Album is so great!!!

To all the people talking down on him, fu*k off you have made mistakes in your life also. #FKB

Toptheburner - Definetly his best but...

This is definetly Kodak's best album. But it's still Kodak so you can expect incoherent mumbling, slurred speech, poor vocals, and struggle bars. However, there are definetly solid moments and some good lines as well. Highlights: There He Go, Why they call you kodak, Tunnel Vision, Day to Day

good album, lots of good tracks. i would highly recommend🔥💪🏼

he literally r*ped somebody. please don't support his music

All these hate reviews got me dead .tbh Kodak is quite adequate and unique. Yes he does rap about some controversial things and uses profanity but what kind of MAINSTREAM rap doesn’t.

For everyone saying that he's trash a lot of his songs have meaning, Listen to Ambition. Some heavy lyrics for a 13 or 14 year old

Let me just type a couple of the worst lines on this album: "Put it in her p***y like Mac 'n' Cheese" "P***y ball like Kalilou" "I ain't no Blige, but I'm smoking Mary J." "I'm flyer than a plane" And that is not even mentioning his lack of flow, as he mostly raps off-beat and does nothing original. The only song I like on this album is Tunnel Vision (obviously) because of its.catchiness. Everything else is borderline unlistenable.

Lyircally awful, kodak somehow manages to have all his songs in such a similar sounding fashion that it almost could have been passed as one song compounded of all his repetition, this is despite a good beat selection ( the only redeeming aspect of the album).

Kodak Black will go down as the worst rapper in history, actually what is this garbage

people. one is not me. the other might be. (i felt bad we didn’t take engagement pictures or did the wedding tradi…

I work in the garage all day long, painting pictures, inventing songs I’ll visit life but I can’t stay long

@NYCMayor @NYC_DOT What a nice use of taxpayer money. Don't worry about fixing the problem of rising crime, just ke…

@evasucc Is tru. Anything you make on a fixed medium is automatically copyrighted. Whether it's a painting on a can…

@Taijuey Malazan. Mostly because Erikson was/is incredible at painting mental pictures in a way no other author I've read has been.

"Why are you painting pictures of boats in this meadow?" "Sometimes in life, you have make your own oceans"

Honestly as a producer outside of Dr. Dre, Quik and Rick Rock, @JusticeLeague are just musically painting pictures.…

@ktcurlsss: cp24 dehumanizes black people by painting a false narrative of them being a criminal/instigator by using pictures that inapp…

@gerhardrichter: “I always aspire to paint good portraits, but I can't do that any more. I'm much more concerned with painting beautiful…

@Daystack: I wanna go on a picnic date downtown by the bridge around the time the sunsets to take pictures and get to painting is that…

@genUltra: @weeniedesu Thank you for your consideration. I often draw fanart or pictures inspired by the things I'm interested in. I als…

Painting Pictures is the debut studio album by American rapper Kodak Black. It was released on March 31, 2017, by Dollaz N Dealz Entertainment, Sniper Gang and Atlantic Records. Recording sessions took place from 2016 to 2017, at the Pink House Studios in Miami, Florida, with production provided by Metro Boomin, Southside and Mike Will Made It; as well as guest appearances from Future, Young Thug, Bun B and Jeezy, among others.The album was supported by three singles: "There He Go", "Tunnel Vision", and "Patty Cake". 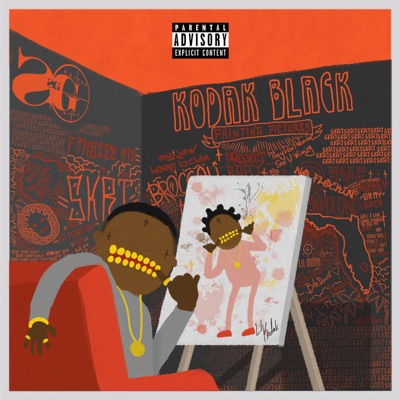