Def Leppard - The Story So Far: The Best of Def Leppard album info will be updated!

The Story So Far: The Best of Def Leppard (Def Leppard) Album Songs

Def Leppard - The Story So Far: The Best of Def Leppard Album Comments

What do you think The Story So Far: The Best of Def Leppard album? Can you share your thoughts and listen experiences with other peoples?

The Story So Far: The Best of Def Leppard [Def Leppard] Album Reviews

pholly - Should have been better

If you want their best “hits” or “best of” album get “Rock of Ages: The Definitive Collection”, it’s by far superior to all the others but for some reason it’s not on iTunes. If you only want stuff you can get through iTunes this is your best bet but you’ll need to buy a few songs from a few albums to get a good collection.

The story so far??? Starting after the legit Hard Rock they once made? This is one of the worst compilations I have ever seen by any band ever. And the albums "High N' Dry" and "On Through the Night" are completely missing from iTunes. Is there some sort of legal battle going on between the band and their balls???

StarWarsandPokemonLover99 - Can you haters die please?

Where is Too Late for Love? This is garbage!

hughdog - Support for one of the greatest bands of all time

Nothing more needs to be said.

Best of????? Not...even...close. One of the greatest hard rock albums of all-time is “High N Dry.” To completely ignore that album, along with “All Thru The Night”? A crime. These songs represent the softer/weaker side of Def Lep...possibly the sell-out side.

This is another money-grab from the former "greatest band of all-time". Nothing to see here but fangirls and zealots with ZERO perspective heaping praise on a B.S. collection of re-ordered "hits" packages from the past with MAYBE two twists thrown in to claim it's somehow original. SIX from 'Hysteria' - yep. THREE from 'Pyromania' - yep. FOUR from 'Adrenalize' (the only departure and mild surprise from the previous umpteen "hits" albums), yep. THREE miscellaneous from a soundtrack, a GREAT B-Side album and ironically, a rip from their FIRST "hits" album. Add in one mediocre and highly self-touted cover of Depeche Mode and you have Def Leppard squeezing more money from their ever-so-devoted fans. I was one until I saw this. My favorite band of the last 33 years now really starting to show their spots. This is pathetic and embarrassing. RRHOF??? Joe always claimed to not care, but now he does. Phony disingenuous you-know-whats who haven't changed their show in years and sapping the unassuming fans. Shame on you #defleppard

Like he said, we’re is all the older stuff that made the band who they are today?!???!

syddon - The Vault with a Mediocre Cover

This is just The Vault greatest hits collection with a remake of one song and a pretty iffy cover of Depeche Mode. Save your money and listen to the Marilyn Manson cover, which is light years better.

Stonerbeachbum65 - Enough With The '83 To Present Stuff!

Why has Def Leppard's label avoided including songs from their '80 release "On Through The Night"? Songs like "Rock Brigade", " Wasted", "Hello America" are all great songs. And tgeir follow up "High N' Dry" was even better with gems like "Let It Go", "Lady Strange", "High N' Dry (Saturday Night)", etc. There's more to this album than "Bringin' On The Heartbreak". So for this collection it the same songs we see over and over again (Photograph, Rock Of Ages, Animal, Hysteria, etc.). A waste of two discs if you ask me.

I'm tired of bands re releasing their greatest hits over and over again. Just buy the one song personal jesus. Yeah, let's make one song and release a greatest hits. COME ON…….

I have every studio & live album but another greatest hits /best of collection ?? Hardly there best stuff is here & not representing every album is a shame. If you are new to the band pick it up but for long time fans this is a slap in the face. I guess Leppard owed one more album to there label & said ok a best of collection will do.

Let It Go???? Bringin on the Heartbreak???? This release is NOT the BEST.

Love the people who come on here sayin they have to support ex wives lol... it’s remastered, and you don’t have to buy it. I can definitely here the difference in the songs...a must have

SOS again. I love all the songs but they need more money for castles and sports cars!

Fan for life and this tune is just another reason why.

Just get the Rock of Ages album if you want a hits album from them. It's their las "hits" album. I have had the double cd for years. I guess that the band is washed up when they start releasing more hits albums than necessary.

Takes some of Def Leppard’s greatest hits and puts them all together what else could you ask for?!!

When I found out Def Leppard was coming out with a new Greatest Hits Album that feature Kings of the World on it, I literally flipped out like you wouldn’t believe. I’ve never been so excited over a Greatest Hits Album in my life, besides Elton John’s Diamonds. I love every Song Def Leppard has came out with, making me their Biggest Canadian Super Fan in their 20’s

The Story So Far: The Best of Def Leppard Wiki 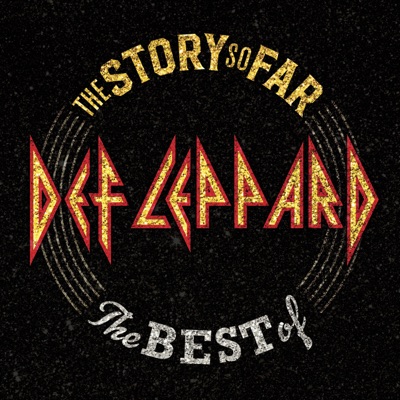 The Story So Far: The Best of ... Album Credits

The Story So Far: The Best of Def Leppard Similar Albums