About The Marshall Mathers LP2 (Deluxe) by Eminem Album

What do you think The Marshall Mathers LP2 (Deluxe) album? Can you share your thoughts and listen experiences with other peoples?

The man is a master he knows exactly what to Do more often he feels what the world is vibration he takes it in and spits it out. It’s golden once that process is done..........and how amazingly beautiful this whole process is

Not to overlook his first three-peat (SSLP, MMLP, TES). But truthfully, I think this is Eminem's MAGNUS OPUS. It's a masterpiece.

If you think this is fast try Godzilla (feat. Juice WRLD) it is way faster.

Eminem is the rap god. This album was amazing from start to finish. Glad I got to see The Monster Tour with him & Rihanna performing “Monster”

Soooo fast! Rap god is the fastest rap I have ever heard!

Red dead fanboy - Must have

This album helped me through a rough period in my life. I love this album, and be darned to what haters say. All I need when I’m down is an Eminem album.

THE WORDPLAY. THE FLOW. LITERALLY EVERYTHING. VARIETY. IT'S. ALL. THERE. first sequel to be better than the original imo

The effort that went into this album is inconceivable.. i’m always amazed when i re-listen and hear so many things i didn’t before.

AustinTheSquirrel - The album upon itself is amazing

The album upon itself is amazing, but it is a little overpriced per song.

Still my fav rap album of all time!!!

gyrohero - Better then the original

I stand by this

Eminem will never diss Tiny Diamond or the Goobmaglobgollab (sorry if I spelled it wrong) and I think ITunes decided to reset all of the reviews for his albums.

This album had almost 30k reviews what happened

This album had almost 30,000 reviews. What’s wrong with iTunes?

Yo I am a huge fan of Eminem and I just got to say that his old and new music are 💯 Awesome to listen to and hope he makes more raps.

Greatest Of All Time

Rap god is the best song!!

DAMNNNNN YOU FAST BRO. I’m just not a big fan of rap but you might just change my mind 😉

Not a fan but I’ll give u three stars sense my friend likes ur songs :)

I love this album but Monster is my fav. If you love rappers and Rihanna Monster is a song you must check out. 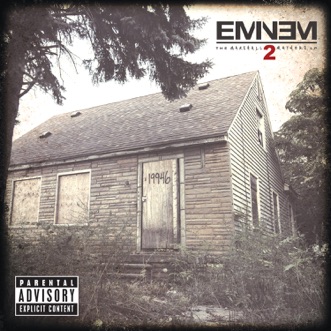