What do you think 7 - EP album? Can you share your thoughts and listen experiences with other peoples?

stop being so mean 🥺

kevinisgodatfornite - The ytp is better👍🏻

Hi my name is justice

Legit all the songs are 1 or 2 minutes long. How is this considered anything. Very pointless work

Rodeo was freaking great but featuring Cardi B was the worst decision of Lil Nas X’s career, by far - that was a worst decision than featuring Young Thug, Yeedling Kid, and BTS on freaking Old Town Road. (Shake My Head.) 🗑🗑🗑

Horsesareawesome14 - I know lots of people have said this.

It would have been so much better without cardi b. She kind of wrecked the songs vibe. And also. I think that he is a very good singer and rapper. The main ones I liked were panini, old town road, and rodeo. There is another version of rodeo that I prefer and it is the one featuring nas. And there’s no cardi b! I think that he should continue with his career.

Okay so a lot of Lil Nas X was Cliche Auto-Tune and Cliche beats that sound like drum features on a Casio Keyboard 🎹 but It’s his high sense of Melodic tones that truly Makes the man Special of course Ol Town Road and Panini come to mind!

Best song I love it

Hat down, cross town, livin’ like a rockstar, Spending lot of money on a brand new guitar Baby got a habit Diamond rings and fendi Sports bras riding down rodeo in my Maserati sports car

Did he write this in 2nd grade? How have we gotten to the point where something like this could be considered music or creative or even worth more than a minute of our time? Synthesized, pointless, and just plane awful music. Go listen to a real artist with real talent like NF, for example. Pass on this trash...

I love this album, it’s by far one of my favorites, I think he has a unique voice and he’s talented in my opinion. Only thing I didn’t like is maybe to much auto tune. I prefer real natural raw you know. Otherwise he did great :) Also Just because he named the album 7 doesn’t mean there’s gonna be 7 songs on the album, it’s just what he wanted to name it.

I feel like a lot of people don’t like this but I personally think it’s cool. It’s not anything to absolutely freak out over but I like it. I just don’t like that there are two old town roads and I do not like rodeo at all. But the other new songs are cool. Bring you down panini and family are all good. I really like kick it though.

I kept hearing my 6 year old singing the popular single on here, so as opposed to spending $1.29 on one song I got a ten minute autotune album for $6.99. #WINNING

Actually it’s not bad at all 😭 I weirdly like it and even though some of this sounds like it’s meant to be a joke, I respect him for not fitting the mold of literally every new rapper ever 🤷🏽‍♂️ also, stop calling it rap just because he’s black 😭 hate to pull the race card like that but y’all do realize that rap is it’s own separate genre that symbolizes rhythm and poetry, and lil nas x sings more than anything else. like i’ve never heard him spit bars. so his music is definitely not rap, and alternative is probably the appropriate genre because he’s so versatile that his music is without a specific genre.

Only came for that, but why in the living hell where you working with that lowlife, cardi b?

It's a hit but I just wanted to recommend that it had more upbeat words. Not to be rude

Lil Nas X 🤠 - There is no clean version

I need a clean version pleaseee

Panini is the best song. Keep it up lil nas x!😎

It says butt and other gross stuff IF YOU ASK MEH ABOUT THIS ONG IT IS SO BAD MY BROTHERS EVEN HATE IT AND ITS OLD PEOPLE ARE NOT INTERESTED IN IT ANYMORE SO BAIIIIIIIIIIIII!

BEST SONG EVER IN THE WORLD

half of these songs aren’t even alternative. other than that, this album is alright

Love this album. It's succinct and to the point (10 minutes). Old Town Road and Panini are two of my favorites. I'm feeling how he made his own lane. Not just rapping, but singing too! Shaking up the Alternative genre. All killer, no filler!

This is a ten minute album and let me say that this album is terrible. It's one of those ones where ya'll will like it because it's new but i like a month or so everybody will forget about it.

I think it is a good

He’s talented and successful and the r@c!$ts are mad 😢🤡😂

why all the hate im confused

This song is 2 behind old town road

Amazing but where’s the clean version ?

the rap guy - Get rid of old town road

And then it’s okay

I think it's just great!

Although it has its flaws, like every album does, this album proved that he isn’t just a one hit wonder. It’s got some bops.

Great !! I’ll be keep on streaming

I am in love with his EP. keep up the great tunes lil nas x

onerepublic in the 6ix - One hit wonder

This album isn’t perfect, by far, but to me it shows that Lil Nas continues to be unafraid of doing genre crossing as well as making music the way he wants to. I enjoyed it- I think a lot of professional reviewers have been way too critical (which isn’t new).

dude ok this exceeded my already high expectations. he’s touched on nearly every genre here and i’m obsessed. this should be #1.

Lil Nas X proves he has substance other than old town road.

I did not expect this from him, obviously music on this is not for everyone but this is because he used DIFFERENT GENRES so that there is SOMETHING FOR EVERYONE🔥🔥🔥

This is kids bop music literally

Obviously music is subjective but I think this ep is great. The songs cover a variety of genres and are quite catchy. Also whoever made the beats/instrumentals has some serious talent.

Not a happy Gandolf - Diverse

For a young guys first project it’s good to see diversity and where his music may go. Great first EP.

wish it was longer, this song is a bop

It’s not what we were expecting

The songs are good. I'm not completely happy with F9mily, however the overall album is nice.

Lil Nas X is a treasure and hope he continues to release great work in the future.

Will be a hit banger!

Wow, what a surprise, I love it - a great mix of tunes and beats.

Although many of the songs are overtly simplistic, they’re still pretty melodic although somewhat average. Got to say the versatility Lil Nas X exhibits is pretty impressive though. My favourite tracks have got to be Kick it and Rodeo by far.

YEET, swag, BOYA, this guy is an OG. But mayun, he ain’t hit the dab on this one. Too artistic for me, he ain’t gon TAKE MY HORSE, he just on some Kanye. He CRAYY CRAY, HE BAD. He ain’t no good no mo mayun. #swag

majtyno - just as I thought

Apart from the unecessary features, this extended play had all the components to a well produced collective of songs. Some of the tracks that stood out were “Rodeo”, “F9mily”, and “C7osure”. Lil Nas X has not only found himself experimenting with various amounts of sounds and utilities but has discovered a whole new field of Modern day Hip Hop. Truly a candidate for next years “XXL Freshman List”, Nas is an aspiring influential artist to many young who dream. Only the best for Lil Nas :)

Great Song! I listen to this 24 seven but as the other reviewers are saying it is way to short for the price. But overall it is awesome! A person said their epileptic kid almost bursted into a fit. Well i have epilepsy...and this was awesome so that person is a liar.

terrible terrible album. i played this to my children and my one epileptic kid almost burst into a fit. will not be recommending this to anyone- however the new lana del rey album 'Norman F***ing Rockwell' made my children cry out of happiness. despite the name of the album, this is a very family friendly album. buy NFR by Lana Del Rey.

nas is so creative and original i love it

Wen Der is a new singer u strain on that hate y not allow you’re self to listen to um then decide I didn’t like otr but then I listened to it and I like it VOILA! 😛😛😋😝🙃😙

Wasn’t expecting this. Been on repeat since 1st listen 🥰

Bwfc top strike - Not just a one hit wonder

lil nas x lover - This is the best music

Panini is a great song just 1:53 it needs to be longer it would be better

The album was good but I just the song we’re still 3 minutes. I feel like the song go by quickly cuz there short

Zigiforlyf - We love a one hit person

Wow! He’s proving to everyone that he is not a one hit wonder, love how he’s not sticking to one genre. Rodeo is my favourite and Cardi’s verse takes it to another level, looking forward to the video. He’s breaking boundaries!!

F9mily and Bring You Down are both great songs and the others aren’t bad either (Old Town Road is obviously catchy as anything) don’t listen to negative reviews, give it a listen yourself.

Pretty much every song is unique. Rodeo is especially good

FlaviusR - This guy is a genius.

Obviously mans expecting this to a bit of a dry ting still but half these tunes are actually bang, more time you’ll probably be rushed by all ur mandem if you played these tunes in front of them but still Instagram:sxmeer.1

Ya fiend - what the hell

what is this disgusting music? old town road is he only half decent ‘’song’’

otr only good song! so disappointed

@Suhocheeks1: @wrldjmn baekhyun is the first korean million seller soloist in 19 years, yixing sold over a million copies of his album i…

@DanniiMinogue: At last we get to share ep.1 of the @maskedsinger_au with you! Tune in Monday night at 7.30 on Network 10 to find out wh… 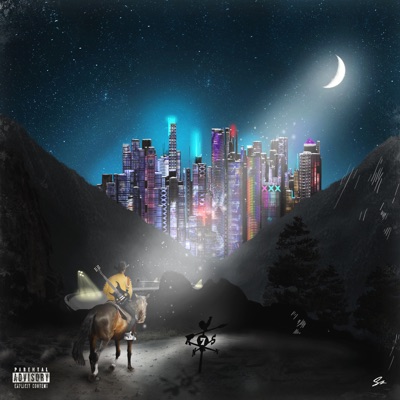