About Lonely Generation by Echosmith Album

What do you think Lonely Generation album? Can you share your thoughts and listen experiences with other peoples?

Wow, I don’t know how Echosmith has become so underrated, they create such relatable indie pop music. Their songs are all earworms that just get stuck in your head for days, and yet for some reason this group has yet to break out with a second “hit” single since Cool Kids. Love you all, and never stop doing what you love. People are listening. 💕

My favorite song is cracked and stuck. Great album

I don't know, but if it's just me then so be it. Well, I have followed this band of siblings since their humble beginnings when itunes actually gave me COOL KIDS as the free download for the week. I am hoping the songs on Lonely Generation will grow on me because I still love Sydney's vocals. After this first go of listening to all of the tracks the thing that stands out the most to me with these new tracks compared to the other Echosmith songs is the lack of "catcheyness." Most are eh, and won't be missed by me if not set to repeat. None of these tracks on Lonely Generation hit me like a ton of bricks. I don't anticipate them getting a lot of radio play either because of that. I tune in to Iheart radio station affliates daily and I have yet to hear one new Echosmith song. Will this change? Hard to say, but still a fan regardless.

This is a pretty good album and easy to listen to over and over again. To be viewed more favorably as a band they need to record more frequently. They seem to have a fan base that support them.

I love this album 😝

My favorite song is diamond

They are so underrated, it is criminal. This sounds amazing and every interesting. Keep up the good work y’all.

This band makes me happy. Their message and outlook on life is so positive and rare in this increasingly negative world consumed by the divisive and self-absorbant nature of social media. The Sierota siblings have matured musically and artistically over the last 7 years since their debut album. This album was definitely worth the wait.

Love this band, they are not only awesome down to earth siblings but their music speaks for itself, it’s fresh, fun, and unique. Glad they are becoming rising stars again and earning a spot at the top where they belong!

KatieAnnnnnnnnn - Exactly what I needed

I love this band. Music is dead these days but this group is original, talented, relatable, and singing along to these while really feeling the vibe is fun!

Love this band. Truly talented and continue to put out creative music that is catchy and good for the soul.

Love this record!! Been waiting for it since the last release. The vibes of the songs are so chill and groovy. Great content. I love how they always have something to say and it’s always something GOOD and encouraging.

Jasmin may - so good

You guys need to have it.

I love Echosmith. But this new song is so lackluster. Here's hoping there are great songs on their upcoming album.

Lonely Generation is so true and such a gem. Hopefully we can hear more songs where they stick to their truth. Love it!!!

I wish I had it in me to backtrack and get back with an ex. Only because I’m lonely and the dating pool sucks for m…

Really don't understand this generation. The time we live in. Only a lonely single girl would say this.

I agree but also jfc this generation is lonely

The idea that family life was "something for our parents" has resulted in a childless, disgruntled, entitled, and lonely generation.

Between "problematic" anime, maid cafés and various other aspects of otaku, I'd say that Japan has a strong subcult…

Echosmith is an American indie pop band formed in February 2009 in Chino, California. Originally formed as a quartet of siblings, the band currently consists of Sydney, Noah and Graham Sierota, following the departure of eldest sibling Jamie in 2016. Echosmith started first as "Ready Set Go!" until they signed to Warner Bros. Records in May 2012. They are best known for the song "Cool Kids", which reached number 13 on the Billboard Hot 100 and was certified triple platinum by the RIAA with over 1,200,000 sales in the United States and also double platinum by ARIA in Australia. The song was Warner Bros. Records' fifth-biggest-selling-digital song of 2014, with 1.3 million downloads sold. The band's debut album, Talking Dreams, was released on October 1, 2013. 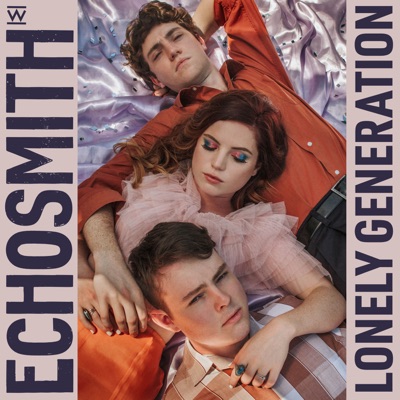