About Birds of Prey: The Album by Various Artists Album

Various Artists - Birds of Prey: The Album album info will be updated!

What do you think Birds of Prey: The Album album? Can you share your thoughts and listen experiences with other peoples?

AlexaBlissfan1 - Hit Me With Your Best Shot

It good album but I like Pat Benater version of "Hit Me With Your Best Shot" better then Adona version is little bite slow.

I hate it all. Burn her

terrible album all around 🤮

Such a good assortment of artist! Plus, just good music, and that’s on period

I got my mom’s blessing 🙏, she knows how much I love the movie 🎥 Suicide Squad 😍😎😘❤️💗❤️, she let me watch it yes 😅... I know... It’s Rated and I Parentally quote “R” but hey 👋 if you show that your genuinely Matured for older adult movies and are not easily influenced to something just because you hear 👂 it , see it, nor do it. My point is BIRDS OF PREY IS THE BEST Movie 🍿 of this year 2020💜🌈💜! Long story short I Watched the tonight and it was 😜😍😜 THE BEST💚🎆🎇🎆! Good night 😘.

Doja Cat and Halsey killed it

After watching this movie the album became my workout go to. Can play and not skip. Just like the movie this is better than I expected. I hope this franchise continues with these characters and vibe

I rarely buy a full album but after seeing the film and watching the music videos for these songs it felt right to do so. Props to Margot for choosing these amazing artists they really compliment each other and the film.

AMAZING, FANTABULOUS, & CRAZY FUN!! this soundtrack is unique and so creatively put together w/ each single. Each song shows a side of Harley and the Birds of Prey. my personal favorite is SMILE.

Best soundtrack of all time I think yup!

wellhamful - So much yes here

My favorite soundtrack. So good

06rowdy - Diversive and In Tone

The music compiled in this album works to create a diverse environment for the film and they fit perfectly! Such a great accompanying accessory to the movie.

It’s so so good love your music

I’m highly offended that they didn’t think to do the birds of prey song from the cartoon.

Every song on here is a hit! Slay girls! Pu$$y runs the world!

Lauren Jauregui killed it! Such a talented human being

I listen to this while I work out! Great beats!

robby bounce - THIS is how you make a soundtrack

everything in here works. great singers, great production, and a lot of fun. introduced me to a bunch of new artists as well

TigersEye6 - No, just no

Pls no. Never. Seriously, I can see why this movie is not doing as well as they had hoped. And really, even the movie was awful.

This album is perfect with this movie!!

Soundtrack is as cringey as the movie. One of the worst flops of the 20s now has a floppier soundtrack to go with it.

The antidote we need to the cranky-old-white-man-baby energy running the country right now. Thank you!

you can;t film a movie based on a terrible character from another terrible movie

Mrs. Guest - This album is all about Girl Power

There is not one song I do not love. This is an amazing album, and I can not wait to see the movie. I purchased the soundtrack after reading the reviews and I wanted to see if they were lying. All true.

This soundtrack is absolute fire!! I’ve downloaded nearly every single song, and they now get me so focused and motivated during workouts. The perfect “girls rule” playlist 😋😍

Well curated soundtrack. I especially liked “Invisible Chains” by Lauren Jauregui. Good production and lyrics, and the artist has an alluring and emotive voice.

The most Random gamer - Marvels better than DC

I love this songs so much!!! I already have a cd but my dads truck doesn’t have CD player only Bluetooth so I bought the whole album on my iPad!!! I would literally put more than 5 star on each music! That’s how much I love Harley Quinn!!! and the songs!!!

This album is extremely fire!!! All the songs are just crazy good!!

I just love the songsss

Only here for Lauren Jauregui & Halsey.

i bought and preordered the album but now I can’t play almost over half of my songs unless I want to get Apple Music?

This is an absolute BOP love it!

Every song on here is so different. But, most importantly - EVERY SONG is amazing!

Diamonds and boss ***** are AWSUM!!!!! ABSOLUTELY AMAZING 😉 THE GAME WAS TOUGH BUT DOJA AND MEGAN PULLED THOUGH ABSOLUTE BOPS!!!!!!!!

How is boss B***h not explicit lol

I love the all girl album with amazing killer songs

I love the sway with me

this album is honestly one of my all time favourites now, the artists that are on this all fit very well to the genre of the film, plus literally every song on this album is a full on banger. every single song is done brilliantly. but, seriously, if you’re looking for some talented underrated artists and amazing collaborations then this is the album for you.

Such a fun album with amazing singers. Definitely worth the 💰. 💗💗

I listened to sway with me 10 times non stop. The beat is sooo good!!! Other than that amazing jamin songs!!!

Pure class. The film was ok but this is hot stuff. Buy it now. Well worth the cash 👍

I really want to watch the movie now

It is cool love it

Colsie - Mostly all chaotic noise and no soul. The better tracks suffer with over singing.

Mostly all chaotic noise and no soul. The better tracks suffer from oversinging and a lack of sublety. Noise for noise sake. Warbling for warbling sake. Where have all the great songs and singers gone?!

Best soundtrack ever made. Absolutely love it and can’t wait to watch the movie!

Jaydeyc - Every song is a hit

Love all of these songs they fit the movie perfectly. Can listen to them over and over

IanKofficial - Best Movie Soundtrack Since Guardians of the Galaxy?

Perhaps! Okay, there's been soundtracks for A Star is Born and also the Elton and Queen biopics but this album just feels so fresh and relevant and... Dare I say it... Exciting! Fun! Full of attitude. Something you can enjoy as part of the movie experience but also away from it, in the summer, on your holidays, travelling, at night, in the morning to wake you up. Very excited to have these song on rotation in 2020!

hyped for the movie but the songs seem horrible

HYPED FOR THE MOVIE NOW!!! The 3 songs released so far are all F***ING AMAZING!!!

Can’t wait for this album 😍😍

I say it every day and I’ll say it again... THIS IS NORMANI’S YEAR. Comes out swinging with EVERY SONG. I can’t wait for her album. I love Normani!!

@LaurenJauregui: #InvisibleChains out now💕✨ go stream/buy it if u have taste💕🥰 https:…

Charlotte Lawrence - Joke's On You (from Birds of Prey: The Album) [Offi... via @YouTube

YouTube에서 'Charlotte Lawrence - Joke's On You (from Birds of Prey: The Album) [Official Music Video]' 보기…

コスコスこれなのかな？ハーレクインだわ Charlotte Lawrence - Joke's On You (from Birds of Prey: The Album) [Offi... @YouTubeより

Birds of Prey: The Album Wiki 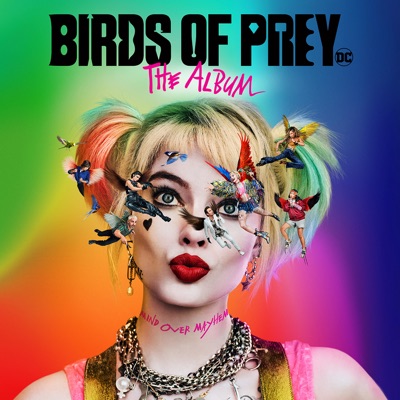