About Bang! - Single by AJR Album

What do you think Bang! - Single album? Can you share your thoughts and listen experiences with other peoples?

It’s a good song. Stop hating on this band, you wouldn’t like it if someone called your creations trash. Stop being toxic. This is like, the only good song made in the last few years

This low key is overplayed and trash

If you don’t like this song, you have a miserable life.

How is this mans voice so grating and irritating? Honestly though, even it was sung by a good singer this song would still be unbearable

#Reviving2020 is exactly what these people are doing. This song has every right to have become an instant hit. It’s a fun song to dance to and sing to. I even made a dance for it, lol. AJR has some raw talent. And I’ve seen most of the reviews on this song, and most people are just haters! Back off this song, you don’t have any right to judge it. If you have something bad to say, keep it to yourself. Other than that, amazing song!! Keep it going, AJR! ~Hayden

BANG BANG ALL THE WAYYY! love this song😆😆

SamMcPie - I love reading these reviews

Personally I love AJR. I love their honest and bold lyrics. This song is no exception, but watching people hate AJR is hilarious haha. Like I’ve seen so many that just say “bad” or like “lyrics are bad” when they’re better than anything that really any popular artist has put out. Don’t get me wrong some artists have decent lyrics, but most songs are just songs that the world would be better without.

divashalo - So annoying and senseless

Why won’t this stupid AF song just die out? Why is it still #3 after all this time?

teamgaga97 - probably the most annoying pop song in years

Why won’t this song die out already?

Catchy doesn’t immediately mean quality. These guys aren’t terrible, but I get sick of this song before it’s even done. That’s not a good sign...

This song makes me wanna punch someone in the face

What A Simp! - HELLO ALL WHO DONT UNDERSAND

Mk, to all those ppl who dont understand the lyrics, lemme explain. Its about how someone’s life is garbage, and some awful things happened, and it’s coming to an end, so theyre “going out with a bang.” I personally think that they are in debt, no way to pay taxes, and because their “taxes are due,” they are gonna blow all their little money on one night, then deal with the consequences later. Now to all who wrote a trash review because you didn’t understand the lyrics, you can rewrite it! (Also this song is frikin great anyway and pretty much sums up my life :P)

AJR is so underrated, I love this song so much!

I can’t stop listening to it!

tj mcdonald - Not my favorite

Nightgury429 - Catchy and good to work out or drive with

Chorus will get stuck in your head forever. And for the people downing on the “Here we go” and “metronome”, that’s an Easter egg. That’s the voice of the NYC subway who’s a big fan of theirs. FYI :)

Love this song so good die or love it

I don’t understand why people are hating on AJR. They have good, catchy songs

Song’s a banger (no pun intended) so stay mad 😁

I saw all these negatives and I don’t get it. I absolutely live this song!! So fun, greak hooks, just awesome and fun!

If you don’t like this song you’re probably toxic and disgusting as a human being. Shut your peasant trap and enjoy the good music. :)

bigbigbidd - This is flaming garbage

One of the worst songs by one of the worst bands out there. In no way is this a good song at all or have an interesting part to it. I’ve never written a review on this app so this should tell you something.

Why do people hate this song? The lyrics are funny and its catchy

There Big Debut! I love the sound and lyrics

This song is the best! My friends and I love it! It's probably not gonna die out for a while.

I’ve heard this song while watching the Thanksgiving Parade and I can’t believe I didn’t hear it before. It’s amazing!

spring in a pencil - Growing old on Bleaker Street

One of my favorite bands. You can count on them to make great hit music💚

Even though this song is a little old now, it’s such a great song a i love when I hear it.

carpayedi - To all the haters

Bang Bang Bang!! - This song is the best song I have ever heard

There are a lot of amazing artists and amazing songs out there but AJR just nailed it with this one. BANG is the freaking best song I have heard In a while. The verse is just so good and then the chorus hits and it’s like the craziest best thing that had ever happened to my ears and I am so proud of them making it to number one

krista mack - I love this song.

I love this song his voice is amazing and believe it or not there are three guys and this song is the bomb and it never gets old I could honestly have a awesome dance party to his songs!

Personally I liked the song, but I don’t care if you didn’t like it. It’s just all these people talking about how the lyrics don’t make sense is annoying. Not all lyrics in every song has to have a deep meaning or make much sense. Personally I like this song just because how it sounds. The “Bang Bang Bang” part is catchy and overall the song is pretty good. I’m also a fan of AJR.

Trash can, this music is garbage!

It’s an absolute banger and is constantly in my head, but in a good way

I gave it a 4 because his voice is honestly kinda annoying after a while, but when he says “ here we go “ that makes me tolerate his voice a little bit longer to withstand the rest of the song! Thanks for reading <3 have an Amazing Day/Night! 💖💖

It’s one of my favorite songs and it’s very catchy :) Haters just hating because they are tired of it being on top -

This is just kinda sad. These lyrics are just bad.

This song gives me the biggest headache it’s so fricken annoying god!

It’s a party anthem gone wrong and I just can’t stand the Mario sounding “Here we go!” This song needs to be stopped.

I cant tell you how BADLY I wanted to see Dort pump fake Harden and then bang that thing right in😂 that shot wouldve single handedly ruined Hardens entire Legacy...every Houston fan wouldve deleted their accounts for good lol.

The #universe may have actually started with the #BigBounce—not a #BigBang The Big Bang relies on an idea that is contrived and limits scientific inquiry Could the universe have bounced into and out of a single-particle #singularity? #Cosmology #Physics.

I was outside and I think someone was testing their fireworks to prepare to dip out of this unholy year with a bang, and lemme tell you, when you hear single fireworks go off super close to where you are, that shit scary. It sound like a bomb 😶.

@jessicattios Single player is really fun, don’t get me wrong, but the multiplayer stuff is definetly where you’ll get the most bang for your buck..

Knew it YG not gonna give my rosé her single. but blinks (new kpoppies) would show up in my mentions and say be patient / YG will give her a single yada yada🙄🖕🏽 been through this YG shit since big bang and 2ne1 lmao .

I downloaded a fuck ton of anime girl Gmod models and omfg they're hot af. I would bang every single one of the anime girls..

@bangdreamgbp_EN bang dream girls band party social media employee are you single i think i'm in love with you. 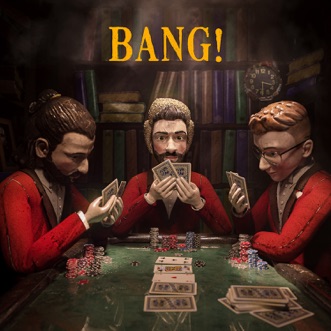