About Made In Lagos by Wizkid Album

Made in Lagos is the fourth studio (and second major label) album by Nigerian singer Wizkid. It was released on 30 October 2020 by Starboy Entertainment and RCA Records. It features guest appearances from British artists Skepta and Ella Mai, American R&B singer H.E.R., Jamaican artists Projexx and Damian Marley, and Nigerian artists Burna Boy, Tay Iwar, Terri and Tems, the latter of whom features on the international-charting song "Essence".

Made In Lagos (Wizkid) Album Songs

Wizkid - Made In Lagos Album Comments

What do you think Made In Lagos album? Can you share your thoughts and listen experiences with other peoples?

Made In Lagos [Wizkid] Album Reviews

This album is lit.

That’s the best African album of the year. Great voice delivery from wizkid to every featuring artist on the album. All the Producers and sound engineers who worked together in the MIL project delivered the best in their craft. The Mixing and mastering of the project was like fine wine. Great !!!

Best he ever made

Star boy on another level

This is arguably one of the best of the year 2020. Wizkid has matured with his sound and it’s now like a global sound, everyone can relate to it. The album grows on you each time you play it

I had been waiting patiently for this album to drop and it didn't disappoint. You can play this album front to back and not ⏭ a track.

Feel good but no depth in lyrics. So much to sing about in 2020 but this album limits itself to the night club perspective/narrative

depay0623 - Wizkid is the real starboy

Best of the best

This album Deserves a Grammy nomination

Album Of The Year🏆🥇🏅

akpofurare - Album of the year

No body does it better than Star boy✌️✌️

This project deserves a global recognition and a Grammy Award 🏆

This is a Blessing to Us❤️🦅

Supahboi_ryan - Made In Lagos is fire

Don’t sleep on this... Machala Wizkid Starboy is Africas best 💯

The energy is too smooth! You can feel the growth and peace of mind

Oluwa_lo_Seyi - Album of the year

Wizkid took his time to create this melodious songs.

Whole album is a vibe. It’s been on rotation like crazy 💚🤍

This album 💿 is phenomenal, I love all the songs on it but my favorite is #NoStress!🥰

yestheyscammedme - Only one star boy

So dope, every single track on this album

The album deserves all the hype and more

This album is top notch

Gdozkkz - The greatest album out of Africa

Wizkid is the greatest artist for this album!

This music makes me feel like I am laying on a luxurious satin sheet with the love of my life♥️♥️♥️ Wizkid DEFINITELY did his thing. He came through with this album. These songs are for the ELITE & deep thinkers. The songs are sooo sultry. It’s beautiful. I think every race can listen to this song without a problem and that’s what I really love about this album. THANK YOU WIZKID FOR BLESSING US WITH THIS AMAZING WORK OF ART♥️♥️♥️♥️♥️ 🦅🦅🦅🦅🦅🦅🦅🦅🦅🦅🦅🦅🦅🦅🦅 🐐🐐🐐🐐🐐🐐🐐🐐🐐🐐🐐🐐🐐🐐🐐

ned & eriporsha - Made In Lagos

Cool music and a lot of message 🇳🇬🇳🇬

Proud to be Nigeria 🇳🇬

I love this album so much❤️

Wiz my bro you’re too much

This album gives me all the chills.

Wizkid or Starboy is no stranger to making history, and truth be told, this album is the genre's another history making moment. All his previous projects were all history making of sorts. The most noted being his debut album, Superstar, where he took the Nigerian music industry by the storm and announced himself to the world by winning a MOBO award. wizkid's sophomore album AYO was a solid project too but wasnt as explosive as his debut album, but AYO was very significant in the career of young wizkid because of Ojuelegba which helped to lunch his international career to levels hitherto unknown for any Nigerian artists before him. the third history making moment was Sounds from the other Side (SFTOS) where wizkid changed his sounds completely that it took even his diehard fans by such a surprise that the initial reaction was so lukewarm and disappointing but the album has survived and has achieved great things ever since. It is also a point of reference for his newest masterpiece titled Made in Lagos. this is because having finally understood what wizkid was trying to do on SFTOS everyone was ready for wizkid new sound direction in form of Made in Lagos. so in between the two projects was an EP Soundman Vol 1 which was also amazing tbh even though the reception was a bit lukewarm because of the manner of the release without any prior notice and because there were other issues elsewhere in Nigeria that overshadowed the release of Soundman Vol 1. in Made in Lagos, everything that Wizkid was trying to do all came together in an amazing fashion, name it, smooth and polished production, improved lyrical contents, chemistry, stellar collaboration, balanced mixture of different genres etc. the result was a smooth sensual albeit carnal and hugely addictive album deeply infused in the afrobeat genre. this album has made even wizkid most vicious critics to eat their words convincingly, emphatically speaking. it has since topped charts won awards and placed on lists of best albums all over the world. i recommend this album highly and also wizkid's previous albums to every adults and teenagers out there

It was worth the wait. Wizkid is just an Afrobeats genius. This album just excites my love for Africa and the rich culture. From the saxophones to the drums. This album has done it for me. Feel good vibes and great collaborations.

Cynchaaaa - The best to ever do it!!

Beautiful Sound and Music. From Ghetto to VIP Lounge . This is Album is more international than made in Lagos

Tina Chocolate - This is such a vibe!

Wizkidayo killed it. The entire album is such a vibe... I can’t even pick a favourite track; Essence, Blessed, No stress, Ginger...💯

ALBUM OF THE YEAR

Love how it’s got a touch of different music genres.

This album shows growth . The rhythm is unmatched . This album is soothing and I will listen to this over and over ....

yxng philz - Made in Lagos - philz

Can’t wait to see the other type of wizkid

2 songs of this and it already bangs! Can’t wait for the full release Starboy 🦅

The Pre released tracks are sure sign that Made in Lagos will set the music world alight. Well done WizKid Machall 1 of African Music 👑

No be your fault

Made in Lagos is going to be a great album, Buy and listen to good music now!!

The songs off this Album are fire, too fire. Can’t wait to listen to the full body of work. Afrobeatz legend Wizzy!!!!

@_Made_In_Lagos Like artist like Stan... Cuteness overload... How much did you call that your bride Price again jare 🚶🚶🚶.

What happens in Lagos!! @ajebutter22 made a masterpiece.

Which of these has been your fav of wizkid's album so far❤😩 - Superstar -Ayo (joy) -SFTOS -Sound Man EP -Made In Lagos.

@wizkidayo Made in Lagos album hits differently when you listening and eating SUYA..

Define a perfect Music album: Made in Lagos -Wizkid.

Lagos is a state made up by different LGAs and LCDAs.... Yet everyone in Lagos claims lagosians.... Warri is an encompassing name and everyone that stays in udu,ovwian,Effurun,some parts of okpe etc all claim Warri and I'm sure yunno this .

Made In Lagos Wiki 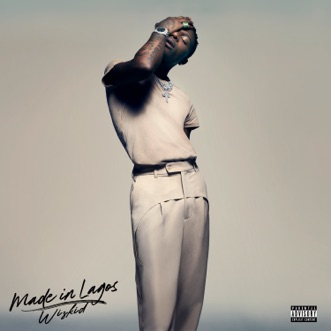 Made In Lagos Album Credits

Made In Lagos Similar Albums