What do you think The Lunar Injection Kool Aid Eclipse Conspiracy album? Can you share your thoughts and listen experiences with other peoples?

Sounds pretty much like the rest of his dribble since he went solo.

Can’t wait to see hear the rest of the album

Eddie Gibbons - This is gonna be awesome

King Freak was killer. Truly the coolest thing and song to come out of 2020. He has a sound and he nails it. This album is gonna be an exciting mix of genres. Zombie rules

Always does what he wants, stop hating. Keep killing it.

Hearing the first track on this album, i immediately bought it and preordered the album bc it got me so pumped about the music. This music has a different feel to it like going back to their ahite zombie roots and rockin it.. buy it, rock it and jam to this song as you will not be dissappointed !!!

No Nick name they. Are taken - Kool-Aid Zombie!

Sounds like every other song he’s done. Last couple albums have been as bad as his movies 🤷🏼‍♂️.

I would say holy cow, but there’s nothing holy about this track. But it’s what we love about Rob! This track is the best since Hellbilly Deluxe. It’s hard , brutal and amazing. Absolutely love it! Had the opportunity to see him twice, hell of a show both times. He is so awesome! This is White Zombie heavy. Can’t wait to hear the rest of the album.

Love the we new song! Sounds like white zombie!

ArcanVm - This will be a big one

Rob Zombie albums have kind of been phoned in for the past decade but this one is going to be a huge creative return to form. Way more guitar oriented and heavy like the white Zombie days

Excellent flow, back to the Zombie we love!

STEALTH 042 - Rob Zombie is back to his roots

Sounds like his old stuff from hellbilly deluxe and sinister urge! Hopefully the rest of the album is like this!

alright yeah time for another new album of yeahs. Along with lyrics that don’t make sense but loud heavy music combined with samples. Yeah yeah yeah. 🤘

Shakewell - The Triumph of King Freak

Great song as usual. Can’t wait for the record 🤟🏻

I’ve been nodding my head to zombie tunes since white zombie days and personally I feel like this is the hardest hitting single of a new album since Hellbilly deluxe. I feel like they really captured that heavy progressive industrial monster sound that made us all love zombie to begin with. Even down to the way rob is singing in this track is reminiscent of astro creep and Hellbilly. I’m loving those low guttural vocals. To me, those are the style of zombie vocals I think hit the best. Can’t wait to hear the rest of the album!🎃

For ANOTHER Rob Zombie ALBUM to come OUT!!! Click yes if you agree!!!

Hey Siri, play “The Triumph of King Freak (A Crypt of Preservation and Superstition)” by Rob Zombie from “The Lunar Injection Kool Aid Eclipse Conspiracy”. #YMMV. 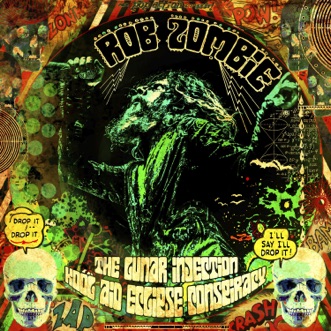