About Positions by Ariana Grande Album

Positions is the sixth studio album by American singer Ariana Grande, released on October 30, 2020, by Republic Records. The singer worked with a variety of producers on the album, including Tommy Brown, Anthony M. Jones, London on da Track, Murda Beatz, the Rascals, Scott Storch, Shea Taylor and Charles Anderson. Grande discusses themes of sex and romance on the album, which continues the R&B and trap-pop sound of its predecessors, Sweetener (2018) and Thank U, Next (2019). Positions also incorporates elements of hip hop, neo soul and funk, alongside guest appearances from Doja Cat, the Weeknd and Ty Dolla Sign. Upon release, the album was met with generally favorable reviews from music critics, most of whom complimented Grande's vocals but criticized the production and lyrics. Positions appeared in many year-end best music lists from publications. The title track was released as the lead single a week before the album's launch. The song debuted atop the Billboard Hot 100 and earned Grande her fifth number-one single in the United States. It marked her third Hot 100 chart-topper in 2020, and made her the only act with five number-one debuts on the chart. Following the album's release, all 14 of its tracks charted simultaneously on the Hot 100, with the second single, "34+35", arriving at number eight. Positions debuted at number one on US Billboard 200 chart with 174,000 album-equivalent units, which includes 42,000 sales, marking Grande's fifth number-one album in the US. Elsewhere, it reached the top spot in Argentina, Canada, Ireland, Lithuania, New Zealand, Norway, and the United Kingdom.

What do you think Positions album? Can you share your thoughts and listen experiences with other peoples?

sofiiii ♡ - a good follow up to thank u, next ☾

I love Ariana. This, in my opinion definitely isn’t her best work. The sounds are generic and still sound like thank u, next and sweetener. Her enunciation isn’t the best. The songs aren’t very catchy. Probably my least favorite of her albums yet, it all just has the same R&B sound to it. A few songs on here were a nice listen though! My favorites were “shut up”, “safety net feat. Ty Dolla $ign”, “motive feat. Doja Cat”, “POV”, and “love language” maybe I’ll grow to like it more, but for now 3 stars, I was definitely a little dissatisfied once I finished my listen. just my opinion though! xx 🤍

Good you should try it

BY FAR SHE HAS BLOSSOMED SINCE HER FORST ALBUM, SHE JUST KEEPS GETTING BETTER AND BETTER!!!👑👑SHES THE FREAKING QUEEN!!!!

I can’t believe that some tragic things happened to her like the 2017 Manchester bombing. Music is what you use to respond with.

I think this album is Ariana finding her foothold in the world, being at a place of contentment with herself, but also being a little afraid of what happens next in her relationships and personal life. All of the songs are beautiful—not really a fan of 34+35, but it’s a very light, teasing song. My faves are “Just Like Magic”, “My Hair”, and “POV”. I love this era and can’t wait to see what’s next! 😊

I mostly loved 34+35 and positions

such an amazing album you never fail to amaze us with your amazing music all the people saying it’s bad just wanted a thank u next 2.0 filled with poppy songs (don’t get me wrong i LOVE thank u next) but i love this album and i like that you tried something new🤍

I love POV sooo much!

in my opinion nothing will ever top thank u next bc i think that’s her best album. i honestly don’t know how i feel about it, some songs i love like pov, six thirty, and love language. but the other ones are okay. like west side, my hair, shut up, and obvious are so boring. also the track lengths are really short. also pls work on ur enunciation ariana when i first heard positions i literally couldn’t understand a word. i feel like she could’ve done so much more with this album. i don’t wanna see another album from her til at least 2022 or 2023. then she can really take the time to produce her best songs. if she does release another one, i’m not expecting be much from it. in conclusion take me back to the thank u next or sweetener era.

Arianator_Maya - Love it love her

Okay so, her only good song in this album has to be positions because her high notes comes out and gives off a pop-ish vibe something you could dance to but the rest is a no maybe if she did more high notes because I like those high notes she does the rest of the music is basically chill and sounds like she’s trying to a trap thing so but overall good job ari!❤️❤️🤗🧸

I kinda like it but the ones I just like are 34 +35,motive,just like magic,and pov. My favorite one is just like magic and me and my mom listen to it in the car.(10 year old girl with her own phone)

My dad is questionable on this album’s songs but I LOVE them y’all who don’t have it need to get it!!

i missed r&biana so much omg ilysm most fans aren’t a fan because the album is r&b influenced but i feel as though r&b does her voice so much justice. We loved her pop moment but i’m literally so in love with this album it’s crazy 1000000000/5 stars best album and this is coming from a dangerous woman fan

Thx for Positions, Folklore, and Rare for making 2020 so much better.

soozoo1 - Thank you next so much!

Luv the R&B feel. Could buy the entire album for my daughter (she’s a big fan!) thx to clean version. Much appreciated!

The song positions is the best though.

I ❤️Ari! But whats the point of saying that you are a great person if you can’t prove it? Ari, I dare you to write one album that isn’t explicit. That doesn’t talk about sex, or cheating. You need 2 write songs like POV and off the table. Songs of not giving up. ❤️ u ari!!

I feel like a lot of Ariana's music is all the same. This album has nothing different and is all just that same old new pop music. I really like a lot of her old albums bc they were all different and had powerful lyrics, but this album is def not the best album of hers.

I love this album. We really get to see the real her. But the thing I hate is all you out there who are hating on her! Sure she had a lot of filters in her voice but it makes everything sound so much better for the vibe that she is singing about. And sure this album is really sexual but again..... ITS THE REAL HER!! Just stop hating on her. Say some nice things about the album and some criticism but don’t just hate on it.

I love this album and I would definitely recommend it! I love how it has a clean version! My favorite song is positions!

loverheart434 - I love ya girllll

Most artists tend to fall in a rut where they can’t think of new music to write, but with this album Ariana shows her talent, creativity, and ability to continue to write amazing music. “Pov” is a personal favorite of mine along with “Safety net”. Good job Ariana Grande!

She needs a break

This album is definitely flawed, some of its tracks seem out of place and some of the songs can be boring and weird, but it has some of the best songs that Ariana has ever made in her full career!✨🤍 One of those songs is “POV”, a beautiful and sweet track that can be relatable to anyone!🙌🥺 There is also some other amazing songs like “Nasty”, “Positions”, “Motive”, “Shut Up”, “Obvious”, “Safety Net”, “Off the table”, and “Just Like Magic”!🎶✨ It’s an album to vibe to! I would give overall a 70/100% for this record🙃 It’s pretty solid. Also, her vocals...oh my God...they are angelic and beautiful! She really uses them a high level in songs like ‘My hair’ and more...

This Album is everything thank you Ariana Grande for this Beautiful album and you are the Best Singer Ever. 🤩

Ari be going off honey!!! She fire, love the collab with Doja already YASSS!❤️🔥😍😍still gotta listen to it more but keep going Ari! Love uuuuu girl!

LOFDANCER - All sounds the same

I like ariana’s music most of the time but this is all the same. It’s all the same. No speciality. No fun. She’s trying to hard to stay with the alternative trend. Just stay the same. We liked your last albums better.

love how far she’s come. 🤍 album is such a refresher and love every song, even the not so good ones. love you ari!!!💋🤍

Positions is great, everything else is late-night fall-asleep music.

this album is pretty great! my favorite sounds are positions and pov.

Amazing album created in 2020 personly I think there should be a deluxe version but this is one of Ariana’s greatest work ever through 2020 thank u, next.🖤

Donkey Kongggg - The best album ever

I literally listen to it on repeat for hours a day. 10/10 would recommend. The clean version sounds super natural too, like it’s meant to be that way

Ari is too amazing for words.

How can an album basically about sex positions sound so innocent and wholesome, while being iconic and 🔥

ari this is my favourite album of yours and its outstanding ☁️

Surprised the song made it through considering all the innuendos

This is amazing I especially love how Ariana always posts a clean/family friendly one. I absolutely love this album 💿, maybe even the best yet!!! 🤍🤍🤍

stream tf out of it

Position often refers to: Position (geometry), the spatial location (rather than orientation) of an entity Position, a job or occupationPosition may also refer to: 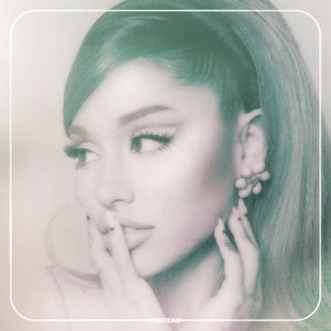