Good News is the debut studio album by American rapper Megan Thee Stallion. It was released on November 20, 2020, by 300 Entertainment and 1501 Certified. The album features guest appearances from DaBaby, City Girls, Lil Durk, SZA, Popcaan, Mustard, Big Sean, 2 Chainz, Beyoncé and Young Thug. It contains production from Mustard, LilJuMadeDaBeat, and D.A Got That Dope, among others.

What do you think Good News album? Can you share your thoughts and listen experiences with other peoples?

Lei Indiana - GET THE HYPE

Megan, is the single approach for the new genre, of rap, pop, electro, it’s eclectic, the single best is her perceived image which isn’t faulty, It accompanies the image & impact for each album

floppy b - No Just No

I don't like this music. I don't understand why she wants people to think she's garbage.

Promoting trash that demeans women and encourages no self respect.

Girl all you write about is sex all sex and how good it is.

I’m not hating on this song because of racism or anything like that. This album is just trash and really bad. Literally all her songs are about sex, can she not write about anything else? And they all sound the same, good artists write about different stuff and their songs don’t sound the exact same. Literally setting back girls and women by 20 years because all she sings about is sex and it’s just a disappointment.

miracoulus ladybug - can she write something not explicit?

Every single song is just like adult content, can you make something like actually people can listen to without having to cover their ears? God. I mean she’s talented- but kinda makes me puke.

I think body is the worst song ever made!!!! Over half the song is one word!?! Seriously who gave this garbage the ok...

Bigbelly83! - The album was trash

Not her best work

Plain, nothing new or novel, been there and over done that...

Kagebōshi - There’s a racist component to all the hate

How is this reviving so much hate, but culture vultures like Eminem are being praised. Cardi and 69 are trash but you see nothing but glowing reviews from culture vultures. When a Black woman puts out something here comes the unfounded attacks. It’s a good album despite the racists sinking the review score.

Jalissa B - Everyone stop hating on Megan

I can’t stop listening to it, period.

Chorus of Body-yady-yady-yady-yady is way too repetitive. I can’t stand to listen when it comes on, which is too bad because the rest of the song is catchy and fun.

Bought this and Ace King today love both of them

I think she’s better being featured on someone else’s tracks. In my opinion she needs more work before she can come out with her own album. She’s a beast with one hit one song or maybe two but not for an entire album.

Another female rapper who just talks about her privates. Two good songs on here and that’s about it. Be more original.

Thanks for all your help

Omg I love this songgggg sooo much

Potential is here, but not with this collection. All themes are vulgar and that gets boring for me. Looks like Missy Elliot and Nikki Minaj will be the classics for a long time to come.

Cool but kick out the twerk is perfect

Felt rushed & no sense of uniqueness. Her freestyles are amazing but when it comes to a versatile and well thought out album it is not there.

Not good, repetitive, not saying anything, same flow, relied off clout from shooting and backstabbing Kelsey. ...and it shows in the music.

So there’s Cardi B, Doja Cat and Megan Thee Stallion? Sorry ladies but y’all will never beat the queen Nicki.

THIS QUEEN IS HERE TO STAY! A lot of things are repeated but this album is FIRE🔥

Honestly rather listen to 6ix9ine

This album is lacking in every area. No story, just a bunch of singles slap together I guess to fulfill her contractual obligations. Shots fired had no place on a debut album. The other songs have no replay value. This will not stand the test of time.

This whole album is a prostitute

Just rapping about her coochie...... she really need to thank Tory for giving her this clout

Theirs one banger on here I love; shots fired. Sometimes Meg crams too many words into her barz, but for the most part she sounds great. Congrats on your success

She does it right.

good news isn’t megan’s best work and i can admit that buts it’s certainly not bad... not even close. it’s a different direction from her previous bodies of work, which i have been wanting her to do for a long time and i commend her for finally exploring new sounds, even if they don’t always work.

Tal!on - Her best project so far!

Megan absolutely BODIES this album in every single way. Not only does she rap, but she explores with pop, R&B and reggae in it. She deserves every bit of praise.

GHQTFB07 - exactly and i told her

You have always been trash 🗑

No versatility, no creativity and overall extremely lifeless and generic. I’m concerned for the people who actually enjoy this “music”. What went wrong?

The album is unreal. ❤️

Aqua in a desert - Ummm

This album just really wasn’t it.. meg has such great songs but this was just bad

Litterally expected so much more from Meghan but this is terrible. Too many features, too many samples and one decent song on the album 🙄

da boy from the hood - Trash!

She really delivered with this album, so proud of Meg this year!

The songs are so repetitive. It’s cute but this is literally Recycling megs old stuff again.

Fiopes - So proud of you!

Well done Megan ! Is there a clean version of the album?

A serve Meg !! Just don’t collab with c*Sri ever again 🖤🖤

GOOD NEWS FOR TARGET expect another #PS5 drop from January 10th or January 11th now it’s not the time to give up DON’T GIVE UP YOU CAN DO IT...😆 .

@TheAmberPicota That's good news, even if you're worried!.

12 hours before 2020 ends I pray that the person reading this I hope that next year will be even stronger. be blessed, get good news, be positive, and stay healthy. Thank you for enduring such a bastard 2020. with so many surprises of course. you all deserve to be loved 💜.

#Redding - "Fortunately, I think we've got a lot of herd immunity that's coming through the mission right now" Really According Dr Fauci Takes 85 - 90% Vaccinations of Staff, #Homeless, Program Members - That Many Got #COVID19 Jonathan Anderson? #COVIDIOTS .

May you receive a good news about what your heart wants..

Good morning fam. It is with deep sadness that we share these news with you. Please see the attached poster for the virtual service. Live now on Facebook We pray for comfort and strength to the entire Makweya family. More strength to @DrTumi_ ♥️ .

@shoe0nhead hilarious how politics and news all went "we'll pick this from twitter and it will be good".

More good birthday news my moefoe64 shirt is on the way😍🎁@maxmoefoe .

Good news is that the reading list is really cool and i’m already reading aristotle and dante .

Indeed, no news is good news ☹.

Good News may refer to: 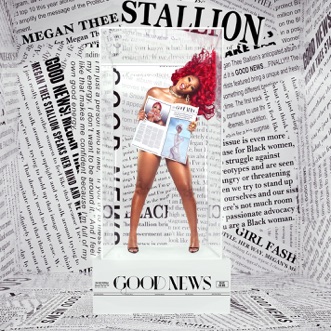