About No End In Sight: The Very Best of Foreigner (Remastered) by Foreigner Album

Foreigner - No End In Sight: The Very Best of Foreigner (Remastered) album info will be updated!

No End In Sight: The Very Best of Foreigner (Remastered) (Foreigner) Album Songs

Foreigner - No End In Sight: The Very Best of Foreigner (Remastered) Album Comments

What do you think No End In Sight: The Very Best of Foreigner (Remastered) album? Can you share your thoughts and listen experiences with other peoples?

No End In Sight: The Very Best of Foreigner (Remastered) [Foreigner] Album Reviews

They are the best

Seriously, I get why Mick has a new band and all that but why go back and record all the music that sounded excellent with Lou singing. Some things do not need to be revisited.

Not sure why this is on the charts currently, but I’m not complaining

I love about half of it. If they made it one CD, i would have probably gave it a 5. They have a lot of great songs. Then they have others that are not bad, but wonder if they put them on here to just make a double cd to make $. i still gave it a 4.

I I qwqq q was thered aaaaw w q to ask

The Original Foreigner Is Great! Mick Jones And Lou Gramm Are The Best Songwriters Behind The Beatles! These Songs Are Great!

I thought this was a good compilation album but I would have preferred to see some of their earlier tracks like "Love Has Taken Its Toll", "Tramontane", "Rev On The Red Line" and "Love On The Telephone", Disc 1 could have easily fit those 4 additional songs on that album.

Awesome!!! It truly feels like the first time, only way better.

This 5-star review is a "buyer beware" review based on the quality of the release, not the music or the presence/omission of certain songs. What IS here is the original LP version of each track, not the 45 version - this is an important point versus the other greatest hits releases by the band. Also note that the present version of their debut contains the 45 mixes and not the LP versions which are found here. The mastering job on the tracks here surpasses the mastering of those tracks on the other releases. As a point of personal preference, I prefer the LP version of each track except perhaps "Cold As Ice" which I lean toward the single version.

I wish I had enough money to get juke box hero.

you know when you have a greatest hits album with 30+ songs the band is great! best buy on itunes worth 18$

It's such a great album!

Thegamingbeast24 - Best album ever made

If you like the songs of yesterday, Foreigner is the band for you! They have a very strong guitar area and I, personally, LOVE that in a band. Gramm rocks the vocals with his unique and lovable voice. I desperately want "Until the End of Time" to be played at my wedding. :) My favorites from the album have to be Cold As Ice, Double Vision, Blue Morning, Blue Day, Hot Blooded(i loved that one since third grade), Dirty White Boy, Head Games, Night Life, Juke Box Hero(who doesnt love this one?), Waiting for a Girl Like You, I Wanna Know What Love Is, and Heart Turns to Stone. Yup I think thats it. Of course there's always "In Pieces", but sadly they decided not to add it in the "Very Best of Foreigner." Hey, iTunes! "In Pieces" IS one of the best! Though it doesn't include that, I shall conclude this review with an important statement. BUY THIS ALBUM!!!!

I WANT YOU TO SHOW ME

This is the best album I have ever bought! I love every song!

I can listen to Foreigner all day. New more so-called "up to date" singers and groups and bands just aren't the same. I actually don't listen to much produced after 2009 and that's a stretch. Most of my music is from the 70s and 80s. So this album of course was a hit with me.

if you dont get this album... thats what you are:P

Why spend $1.25 for every song when you can get MP3 Skull and download free music!

epskionline - Thank you for this

I've been listening to a 320kbps copy of the Records CD for years, enjoying the energy of the music, but feeling the lack of energy and punch that was missing from the recording. Hearing this stuff fresh takes me back. It *feels* like the arena rock that it is now. A/B'ing this with my Records tracks made me laugh out loud. Night and day. Worth every penny. I need to find more remasters...

This album has it all! Can't beat the price!

Dupas-2 - Great songs from back in the day

Great songs that people don't know that the know!!!!!

Great band great music. One of the best concerts I have ever been to. Wow the memories they bring back !!!!!

How could you not put Rev on the Redline on this. Stupid

Foreigner is by far the best rock band there is. Juke box hero is amazing and play it when i play COD. Also Too Late is my favorite song. Every time it comes on i get chills that run down my back cuz its such a good song.

W B J - I agree best band ever

Steve can rock it. When I hear their music it takes me back to feathered hair, trans ams, and when people were kinder xoxox

"Waiting for a Girl" and "What Love Is" are arguably two of the most horrible, corny songs ever created. This band should hide it's head in shame! Classic example of awful arena rock.

Foreigner is probably one of the best oldies rock band ever. If u like rock music this is a great album for u

Love the song "Juke Box Hero"!!! "That one guitar... Felt good in his hands"! My dad plays this in the car while I'm riding to basketball to get me energized. He loves the oldies rock bands and so do I! At 13 years old, I can tell that this is REAL rock and roll music!

Kaybay - One of the Best Groups of All Time

For my generation, Foreigner is probably one of the greatest rock bands of all time. I do not know in todays music world if they would be considered rock but in my era they were. This album contains all the classics including my favorite It Feels Like The First Time. Highly recommended for those who would like to know what the music of the 70's and 80's sounded like. Great group, great sound and great memories.

Love Foreigner & these songs sound better on this “Remastered" edition than on the other flat-sounding Foreigner LPs offered on iTunes but it sounds to me like all they did was jack up the volume on this one. The vocals were submerged a little too much in a lot of the tracks. With pipes like Lou Gramm's, you want him up front & center >> not partially submerged in the thickness of the wall of sound. Also, the bass/lower range is a little too dominant on a lot of tracks & you have to strain to hear the vocals. Still these are the best sounding versions of these songs on iTunes.

hes a jukebox hero, got stars in his eyes

Certainly the best of the best. Love this so much that I am going to go out and buy the CD as well. Thanks guys!

Juke box hero/Whole lotta love is the greatest live song ever. I wish I was at that concert. I would have freaked out when they started playing Led Zep.

I thought I only liked jukebox hero and then it opened up a whole selection of music, and I think it’s a necessity for any rock lover

Everyone should have this album on their phone. All of the greatest hits from a legendary band.

Too nice for classic rock fans my favorite one is JUKE BOX HERO!!!!!!!!

Watching Harold Grossman the pharmacist cover Foreigner with "The Dad Beats" reminded mw how much I love Foreigner.

I love this band! Buy this album

Awesome record. I forgot how amazing this band is.

I have recently got the game Guitar Hero: Warriors of Rock and I played Feels Like The First Time song. If it wasn't for Guitar Hero, I wouldn't have been exposed to Foreigner's fantastic music. Buy this album! You won't anything better!

Any classic rock fan should pick this up right now

I love Forigner! Sorry if I spelt it wrong, I a no good at grammar! This album is great, it has all of my favourite songs on it! I listen to it at the gym, in the car and everywhere!

thetunekid - Great foreigner album all in one box:-)

So much more to Foreigner than the obvious tracks that made the charts try "Until The End of Time" and " I Want to Know What Love is" and "Down on Love" power ballads at their best. Great.

i am a massive fan of foreigner and love lou gramm but you gotta give the album credit, even with the new singer new song - too late, very good :)

I wanna feel what love is, I know you can show me. .

No End In Sight: The Very Best of Foreigner (Remastered) Wiki 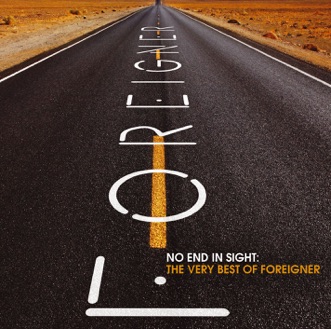 No End In Sight: The Very Best... Album Credits

No End In Sight: The Very Best of Foreigner (Remastered) Similar Albums