About Scary Monsters and Nice Sprites by Skrillex Album

This EP was released for purchase on Beatport on October 25, 2010, and is his first major release since being signed to Deadmau5's label mau5trap Recordings. The EP was an immediate success taking over 8 of the top ten positions on the Beatport home page. Sonny has revealed in interview that he made this EP in his apartment using a laptop. A sound clip of Rachael Nedrow's aka speedstackinggirl exclamations are used in the songs "Scary Monsters and Nice Sprites" and "Rock N' Roll".

What do you think Scary Monsters and Nice Sprites album? Can you share your thoughts and listen experiences with other peoples?

pretty boiii - GOD ITS WEIRDLY SCARY I LOVE IT OMG 😂😂😂

I showed it to my husband. HHAAHHAHA

Skrillex is awesome. But so many more people would buy a clean version of Rockin roll will take you to the mountain. I love that song but I can’t buy. Since it’s EXPLICIT. Plz Skrillex make a clean version. I would buy it for twenty bucks I’m sure lots of others would to. Have a nice day! - Emarald Dumand

I’m not into this type of music, but this song is AMAZING!

I don’t want to kill everybody, but I like the drop and am addicted to this :D (Also, Zedd is a GREAT remixer. I just bought his ZEDD SMaNS.

Cardin K - Just What I Needed

I'm so happy to have found "With You, Friends" it is incredibly beautiful and it fills me with so much joy and hope! 😭💚 Thank you Skrillex!!!!!

I found this and I was like.. this sounds familiar and then found out that my brother always boosts theses songs on his subwoofers (makes them so loud that you can feel the vibration)

I luv the bare noize remix of kill everybody

5harque - The greatest electronic album ever

This is the album that boosted dubstep and all of its sub genres into a new era of electronic music. Well done, skrillex.

I love kill everybody dubstep is so cool

who still listens to this ?🔥

A friend recommended this to me. I was skeptical at first because I don't really listen to Dubstep, but when I actually sampled a song I was hooked. Love it!

Jed Fish Gould - Can You Hear It?

Mister Moore calls his mixes chaotic. I call them complex. <\*/>"KILL EVERYBODY." This song truly breaks new ground in that it forms a genuine melody out of utterly different sounds. These sounds pass at such a dizzying speed, you may not distinguish a melody. Like ever! You may, like its creator, simply hear it as chaotic. Fortunately the sections which form this spectacular melody --- the oom-pah Swedish keyboards, the goofy hoot, the brief guitar strumming, and a more traditional truncated keyboard melody --- is repeated before the song goes back into the chorus. I use the term chorus loosely, because he it cutting new territory in so many ways. But I refer to the chorus as the vocoder kill everybody in the world sounds. The only thing truly grounding this piece is the kick drum. Solid as a rock. Otherwise, it requires imagination to hear. This song, even better than the song Nice Sprites(!), presents music so differently that Skrillex himself may not be aware of it. I suspect not, because he does not seem to play a discernable version of it in performance. Particularly with Diplo. It's like no one realizes how good it is. I have heard music since you could fingerb*ng discs, and this joyous thing is a transformative experience whenever I hear it. The question is: Can you hear it?

All you haters out there are crazy, I've been listening to dubstep for a long time, and I've never EVER seen someone who can make bass growls like skrillex. And the voice editing is great.

Gaffanini - The album that broke the charts!

This level of innovation has not been seen since the first several Aphex Twin albums.

This is easily the best Skrillex album. The songs are all amazing, and if you mix this with More Monsters and Sprites, you get total dubstep happiness. #GodBlessSkrillex

Rock n roll and Scary Monsters are the only songs I really like. - this is coming from someone who isn't a dub step fan

Skrillex has been around for six years and this was the start. IT WAS AWESOME! 🤗

This later makes u passout

If you still listen to this then you're a tool.

This is the best album I've ever heard!

I am so over these songs I used to watch them but by the time I got to 8th grade it changed I decided not to waste anymore of my money on songs like these I mean really songs like skrillex are like the dumbest songs not trying to offend ppl but I'm not a fan of ppl who like skrillex it's crazy I know but STOP LISTENING TO PURE CRAP!!! :( :( :( btw if you don't listen to me I don't care but I know you will regret it when you buy the videos or songs...

Crystal Foxx - Why no get Rock-n-roll?

Representing the beginning of an era. Truly a classic.

Yes ooh my gosh he is amazing

Can u plz make a clean version of rock n roll

This is been my number 1

Why do people like this, it's annoying and not music it's just a jumble of sounds with no real beat or melody.

This represents modern techno music. Any hot nightclub worth its salt will play this album.

This is his best work, after Bangarang, his songs got worse and worse. I’m sorry Skrillex, you were the best at your work. Now Virtual Riot, Snails, and many others are going to replace you.

I can't believe people actually like this. There's only one song that isn't bad, which is "All I Ask of You". The rest? I don't understand why people call this music. By the way, my eardrums are soon going to have to be fixed if I preview some of the songs one more time. And this is NOT the future! If all the music in the future would be like this I wouldn't even live on this planet anymore.

Does this cause cancer?

No video part! - Skrillex Is Awseome😋

Face it "rock gods" skrillex out rules it all. I have gotten more than half the Album and love scatta the best!

Best music ever such good beat love it!

Bruh it’s so good and when I heard kill everybody I just wanted to download it.and I obviously did😃😄😄😄😄😃😄😃😄😀😃

It's insanity! Non-repetitive still got kill everybody on repeat!! And just awesome

Love all of the skrillex music , it brings joy to my ears and face ;)

The man with the beats that are out of the world. Just when you thought music was getting worse now it couldn't get any better

Please! Do a tour in Canada I love all your songs and want to meet you in person!

I don't think skrillexs music is scary anymore but when I was little I watched bad Santa and I had a nightmare I really don't know why but skrillex is awesome. Good job skrillex

Amazing as always Skrillex my favourite song on this is scary monsters and nice sprites!

Best dubstep in the world!!!

It full of unpredictable chaos that has come together perfectly. It is designed to punch you in the face with perfect base, melody, and kicks.

Lord of the Nerds66 - What else is there to say?

It's Skrillex. It's awesome. 'Nough said

Alyson XD - Skrillex is the best

Awesome !!! I very like it and skrillex is my idol

I LOVE THIS!! Totally I love scary monsters and nice sprites !!

This is music to my ears! Luv it.

Rock'n roll is the best song ever!!!. Skrillex is amazing!

Love that song, especially after seeing the Springbreakers trailer ;)

This album is something you should buy! If you cant afford to buy the whole album,at least get scary monsters and nice sprites! skrillex has unpredictable music!

i love this album it has fresh and unpredictable sounds well worth the money.

How do people listen to this, if I listen to this for more then 30 seconds, I get a bad headache! It shouldn't even be considered music!

Such a cool and awesome song

Rock 'n' roll (Will take you to the mountain) is awesome!!!

it so awesome make more

Listen to it everyday go Skrillex

its almost the same sounds my CD player made when it broke, before it broke i was listening to actually good, talented music

favorite artist ever.he has a ton of skrill [pun intended]

I must wait awhile to listen to the Rock 'n will take you to the mountain but Kill everybody and it's remix have bad meanings so I have to wait until I'm 18.

This is real music! Every song is unique and masterful. Recommended for everyone!!!

Bomb! But hold a sec - Skrillex at his BEST

I have to say, this is probably Skrillex's best work(in my opinion). The song "Rock 'N Roll", is a bomb intro song. the song Scary Monsters and nice Sprites is a highly anticipated and highlight track of Skrillex's as well. While Skrillex shows that he is not afraid to drop the bass HARD and rip it up, in such songs as "Kill Everybody" and "Scatta". Skrillex also shows a softer side in songs such as "All I Ask of You" and "With You Friends(Long Drive)". The remixes were pretty epic too! Luv'd them. Over all this album is a must buy, one of my fave's from skrill, if not my fave. Good job Skrill!

Rock and roll, kill everybody, and scary monsters and nice sprites are sweet!!!

This is the best album ever ! You gotta love rock n roll b

DIZ A WIKI QUE In March 2019, a novel study finds that the electronic song "Scary Monsters and Nice Sprites" by Skr… 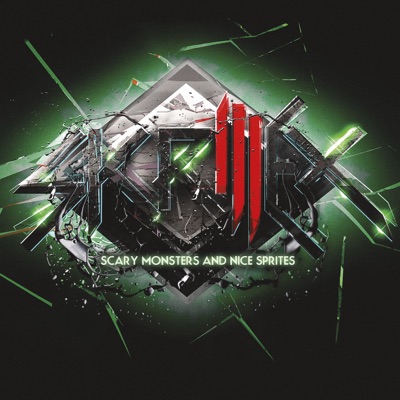