About Houses of the Holy (Remastered) by Led Zeppelin Album

Led Zeppelin - Houses of the Holy (Remastered) album info will be updated!

What do you think Houses of the Holy (Remastered) album? Can you share your thoughts and listen experiences with other peoples?

If you hate happiness don’t buy this

Amazing. Zeppelin at their finiest. Greatest Band of all time. All Zeppelin albums should be owned, studied, and appreciated. Repeat.

I know people don't do this these days, but play this as an album, song after song and you will not only really enjoy every single song, you might actually be amazed!!! No one makes music like this💯

Capitalism and Freedom - Houses of the Holy

This is one of my personal favorite Led Zeppelin albums. This album has a great flow, track after track. Also, this album has great vocals, great drum solos, and great guitar solos as well. Finally, the instruments wrap around the vocals like no other, and intertwine perfectly. Definitely looking forward to the next limited play album, and extended play album from Led Zeppelin.

cheesy97412hotmail.com - Funny thng thing is, not one review less then 5 stars, Love it !

69' to 73', forget bout' it ! There whole career, really. The songs, albums are second to none. At a time when The Who, Kinks, Stones, doors and other classics. Zep Led the the way ! You can talk concept alblum, or you can just talke all time Greats. Funny how houses of Holy song didn't even make it on this ablum, and ended up on physical Graffitti. Stack these guys up with anyone when it comes to first to 5th, and tell me anyone's else's first 5 where better then these guys. Long live Zepp

Some may put The Fourth Album as their best, or maybe even LZ1 or 2, but Houses of the Holy is truly their best, along with Physical Graffiti. Why? Because they experiment with different genres, From funk to reggae to acoustic to even their style of hard rock. Let’s rank their songs The song remains the same- Very good, even with Plant’s helium vocals. 8.0/10 The rain song- a depressing, boring song IMO but still, not bad- 6.9/10 Over the Hills and Far Away- no wonder it’s played frequently on classic rock stations like WXRD 103.9, it’s just so good!- 9.4/10 The Crunge- surprisingly enjoyable, despite what other fans say. Hilarious!- 8.2/10 Dancing days- a rather good tune. :)- 8.8/10 Dyer maker-my favorite song off this album because, you know, it’s fun!- 9.8/10 No quarter- it’s good it’s good it’s good- 7.3/10 The ocean- see “The song remains the same”. 9.2/10 So, good album. 9.9/10

This band is God

What a musical masterpiece. Zep had always incorporated various music influences in their music but this album really was a sonic adventure that only they could deliver…just listen with headphones, close your eyes, and let yourself go…you won’t regret it. This and II are their best albums. It also my opinion that Page’s greatest riff is the one in “No Quarter”. Just my two cents.

This Zep classic transcends time. An absolute masterpiece! Up The Irons!

Buy on cd, Vinyl, and audio

I have had this album in all forms from 8 track to cassette; vinyl of course, to CD. aND, Now, I own it in all its resplendent digital glory. This album plays like a fairy tale! There is nothing here that isn't worthy of timeless admiration. I've listened to this album ever since I first heard it play on the radio back in '73 (I was 10) and it still evokes a deep emotional response, every time. The Rain Song, literally, makes me cry. What beautiful wizardry these Zeppelin boys were into. Look, I can't say it enough.....BUY THIS ALBUM!!!!!

RussDaRulah - One of the Greatest Albums Ever

This record is AMAZING AS HELL I JUST LIKE IT SO MUCH. The ocean is a great drum song to play too

One of the best albums ever recorded

Dhmtber6 - Houses of the Holy

Simply the finest album ever made.

My Personal favorite Zeppelin album. I don't care if its the underrated album. Its still a master piece

The best Led Zeppelin album (in my opinion). Period! Over the Hills and Far Away: One of the most underrated great songs in rock (and my all-time favorite Led Zeppelin song). Listening to Jimmy Page and John Paul Jones riffing lock-step on The Song Remains the Same (don't get me started about JPJ, Zeppelin's and Rocks most secret weopon): Simply awesome The Rain Song: Sublime! The Ocean: One of the coolest songs in rock. And the rest of the album: No song acts as filler. Sandwiched between Led Zeppelin IV and Physical Graffiti, it often gets overlooked, but read the revues: Most Zeppelin fans consider it their favorite or one of their favorite Led Zeppelin albums. Buy It.

This is probably my favorite album ever. I’m 15, and almost all of the music I listen to was introduced to me by my Dad. Led Zeppelin is my favorite band and I love their earlier stuff but I like this album the best. Why can’t music be like this today? Today buying a full album is usually pointless because only one or two songs are actually decent, but albums like this one contain legendary pieces of music with riffs that you will attach yourself to. Every song on this album is great, just do yourself a favor and buy this album.

0Firewire - what is the title

the tennis racket quitarist - HOUSE OF THE HOLY

Also, one of the coolest album covers ever.

Such beautiful rock and roll, especially over the hills and far away, dancing days, d'yer maker, and the ocean, one of the greatest bands ever!

This album from I've read has a lot of the band's most well-known songs and the majority of my favorites are on this album! My top favorite from this album will always be No Quarter because of John Paul Jones's piano playing! But then every song on this album is AMAZING!

Say what you want about "The Crunge" but it swings pretty good too...Great album and a pre cursor to Physical Graffitti.

The best songs are The Rain Song, Over The Hills And Far Away, and No Quarter. This was their last good album in my opinion.

Never gets old! One of the greatest albums. Not one filler track.

Another masterful album from my favorite rock band ever.

Benny243_ - A Straight Up Masterpiece

Well other bands have gotten flak for experimenting with other music then their main genre led zeppelin made an absolute masterpiece. With almost every song being a different genre, every song still sounded like amazing hard rock zeppelin, (standouts songs being:The whole album start to finish)

Contender for top stranded on a deserted Island album. The forays into funk and reggae are the weakest moments, but even they are interesting and entertaining. The rest is pure Zeppelin magic made at their creative peak,

Every song is great (especially the rain song) except for the crunge and dancing days. Also there was alot more hiss on this album than if you were to listen to the same songs on "The Complete Led Zeppelin" but it doesnt ruin the awsomeness of any of the songs. Buy it.

On balance there are several different genres covered on this album . Have to put it in #1 considering all of the songs are solid on their own , put together they really cover a lot of ground.

By Far IMO THE BEST ZEPPELIN ALBUM EVER MADE!!! Great music from first to last song! Must buy for any true fan of Music!!

It seems like this album doesn't get enough praise. It is definitely different than the previous Zeppelin albums. But for a change it is very well made. I will admit that the vocals are not as good as the previous albums. But that is really the only flaw. I really love this album, it is my 2nd favorite Zeppelin album. It is almost as good as Led Zeppelin 2 (which is my favorite).

Amazing album!! If you enjoy 70's rock/metal, then you'll love this ablum. Its Led Zeppelin's 6th album, and it rocks.

I listened to this album all the way through for the first time and I must say, this was MY BEST PURCHASE EVER! THIS IS NOW MY FAVORITE ALBUM! And I have a feeling it will stay that way for a very long time. The album is flawless

When i hear magnus opus and led zeppelin in the same sentence i think Houses of the Holy. This album is perfect, it captures all genres. Funk, pop, progressive, folk, soft rock, heavy metal, reggae. Over the Hills and Far Away is the greatest masterpeice ever made. Period

The big Z has flipped - Amazed

I could keep rediscovering this album forever. Lost between Zoso and Physical Graffiti, this album reminds me of how balanced this band was and how they are better as a whole than individuals.

EVERY SONG, IS STILL UNREAL !!!

LED ZEPPELIN is the GREATEST BAND EVER. ZEPPELIN brought ROCK N ROLL to the WORLD unlike anyone else.........TRULY THE GREATEST EVER.

Faunce13 - Houses Of The Holiest

Love this album not a bad one in the bunch. We all have these albums but itunes wants us to repurchase them again no thanks love it anyway though! PEACE!!

The houses of the holy - Led Zepp

Led Zeppelin is the best. Houses of the holy is definitely one of there best albums. But really Led Zeppelin over all rocks! 🤟

syruse - the biggest band of all time

One of the most successful, innovative and influential rock groups in history they further developed their musical style with this album. "Houses of the Holy" featured further experimentation by expanding their use of synthesizers and orchestration and contains multiple hit singles such as superb “No Quarter”.

Personally I find this there best album! Amazing songs!

Tedham Porterhouse - Not the best...not the worst

Doesn't quite have the hitting power of the earlier albums, but "Song Remains the Same", "Rain Song", "No Quarter" and "The Ocean" are just terrific, "Over the Hills and Far Away" is definitely one of their best songs as well. Definitely a fun and multi-faceted album. It says a lot about the band that the album can be as cohesive as it is with a semi-joke song (The Crunge) on one side and a dense, atmospheric piece of psyche-blues (No Quarter) on the other.

One of Led Zeppelin's finest albums

Easily their greatest album. From the first second of the record to the end, you're drawn into this world of diverse sound. Every track is smashing, 5/5 easy

I downloaded but it wouldn't play. Someone please help. It also says I have purchased it so is there a way to re-download it?

If nobody likes this album they need taking outside and shooting. This album is awesome, superb, I just LOVE IT.

Listening to Houses of the Holy (Remastered) by Led Zeppelin ⁦@ledzeppelin⁩

Led Zeppelin - The Rain Song (Houses of the Holy (Remastered))

Houses of the Holy (Remastered) Wiki 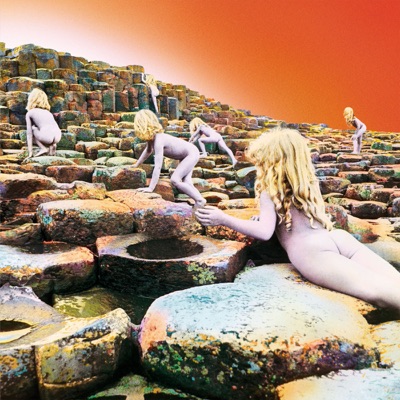