What do you think Airplanes, Pt. II (feat. Eminem & Hayley Williams of Paramore) song? Can you share your thoughts and listen experiences with other peoples?

B.o.b is a great artist and has lots of talent. It's obvious that this album was good but it could have been better. It's also obvious that B.o.b is awesome

It's lame that you can't buy Airplanes pt. 2 without buying the whole album. I mean seriously, Eminem and B.o.B are great and POOR ME now I can't buy an awesome song without paying $12. RIP OFF!!!!!!!

I absolutely couldn't WAIT until this album came out! The second I got it I listened to every single song and I loved ALL OF THEM. Not just Airplanes Pt. 1 & 2, not just Nothin On You. No. All of them! This iz only his 1st album and he's already proving himself worthy of winning peoples hearts w/ his music. I can feel him telling his story through every song. ^_^ Songs I Like the Most: - Bet I - Airplanes 1 & 2 - I See Ya - The Kids B.o.B! I Luv U!! <3

lstegy - The title 4 this review

I want to buy airplans 2 with Eminem, it should be available for us to buy seprate.. (stuped)

Want to buy Airplanes 2 and not have to buy the whole album.

B.o.B. has an interesting sound, but I'm not totally sold on the whole album. Restricting some of the songs I'm interested in to 'album only' certainly doesn't help. At the moment, I don't think I'll be buying the full album, but hey, I'd love to get some of the restricted singles at some point.

You guys aren't making it easier

This is my first full album I've ever bought and I like all the songs!! My favorites are Bet I Airplanes Airplanes pt II Don't let me fall Magic I see ya

I'm with the rest of the dissatisfied itunes users. Um, hey guys, your customers are complaining, why don't you do something about it? Itunes, you're greedy. How very typical to offer Airplanes, Pt. II as an ALBUM ONLY buy. It's truly sickening - imagine the response if the track was available alone? How 'bout THAT? Thanks for being terrible.

Lizario420 - The best album ever

This is the best album of the year. Escpecillay past my shades, bet i, airplanes, and all the others

U SEE THOSE 4 STARS...IT WOULDVE HAV BEEN 5 IF U CAN BUY AIRPLANES WIT EMINEM!!!!

B.O.Bs last couple of hits have been great and the songs on this album are even better. I think we have our album of the year

I usually don't like new rap/hip hop/pop so I was surprised when I came looking for Airplanes II that it was worth buying the whole cd.

Please make airplanes II separate I think it is stuped to make people buy the whole album just for one good song!!

cannot believe that i can't buy Airplanes 2. isn't that the premise of itunes? and as far as the artist, put out a better album and maybe i buy the whle thing, like The Blueprint 3

awesomesoccerbeast42 - You've got to be kidding me!

Ok, i bought airplanes when it first was released and I loved it. Then when they released the version with Eminem, I was ecstatic! Then i realized they only let you have it if you bought the album. This is ridiculous! I have an Itunes account so that I can buy a song without buying the whole album! Now they are slowly making it where you can only get the good songs if you buy the album! First making songs a dollar and twenty nine cents now this?! UGH!

The future I here.

Yes, I agree. Please please please change it to where we can buy that song! I know it's all about the money. But wouldn't you want the money of the single then no money at all and people go elsewhere for free music? ITunes should not do the whole "album only". It's a rip for the dedicated iTunes users! Please remove all "album only" tracks to allow to buy!!! Pretty please....."I could really use a wish right now"!!!

All i want is airplanes part 2

Why are they putting airplanes part 2, with EMINEM of all people, only available on the album. If airplanes is like number 4 now, then airplanes part 2 would be number 1 for weeks! Seriously, either put airplanes part 2 on its own single or on recovery because no one song is worth 12 bucks, no matter how good it is. Eminem deserves it because it is the best song on this cd by far!

I lov a lot of songs on this album, especially Airplanes prt 2. I think tht it is gay that you,as the customer, have to buy the whole album 2 get one song. I love the song to pieces but i dont love it enough to pay $11.99 for it. Please iTunes, you would make a TON of money if u could buy this song seperatly. It would be #1 in no time! Thanks for reading this.

This album is amazing, but it's lame that you have to buy it to get airplanes pt. II.

This thing is toooooooooooooooo awesome.I would say that this album is better than Kid Cudi's.Now shut up haters.Eventhough i still like Kid Cudi I would recommend this more.If u dont have enough money to buy the whole album ill recommend Nothin on You of course,Airplanes,Magic,and Dont Let Me Fall. Keep Up the good work B.o.B ;]

Hes so good!! Zommg and the nothin on you vid is awesome. And i looove how all of his songs have a different chorus. Hes unpredictable. Airplanes is my fave who would think that hayley and b.o.bs voices sound so awesome together!!

The Whole album was awesome but i didnt like ghost in the machine and letters from vietnam but besides that the album was great. Love B.o.B, Lupe Fiasco, and Jay-Z

I got airplanes, nothin on you, dont let me fall, magic and past my shades but i'll probably get more cuz all i play is B.o.B music pretty much

Don't get me wrong, this is a fantastic album. And I'll give it days of playing time. But nothing of B.o.B sounds like cudi. I read all the reviews of people talking about how much it sounds like cudi, but no. This has a very mainstream sound. Cudi has his own thing going. But you should really buy this album.

GOOD ABLUM BUT WTF!! u should be able to buy airplanes pt. 2 separate from the album

The best song on the album. So what does iTunes deside to do? Put it album only! It has the star power and the talent to propel it to the top but really iTunes? Seriously, did I just hear Hayley (singer from Paramore), Eminem (the sickest rapper out there), and B.o.B. (the newest sensation) in one song?

I LOVED this album. Every song is a hit. B.o.B is going straight to the top!!!

this is really the best album i have heard in.... a while. realllly amazing. !

Didn't take long to find my favorite track on this album because it's the first song. If you don't buy the album, at least buy Don't Let Me Fall! B.O.B. is a beast.

Is the best song ever, it's just so fresh, other great songs can be found on this album too though! The only song I'm not a big fan of is nothin' on you, that's only cuz it got overplayed though :/

I remember the night I first heard "Nothin' On You," I fell in love immeadiately. The next day, I heard it on the radio again with my best friend; now he's hooked too. "Airplanes", ""Don't Let Me Fall", and "Ghost In The Machine" are a few of my favorites. The album is amazing. It's one I'll listen to for years to come, and think back to the nights me and my best friend drove around, music blaring.

Where Is I'll be in sky. I love that song and it's not in this album.

never heard someone like b.o.b hes the best must by for everyone finally someone is good at rapping besides lil wayne and eminem 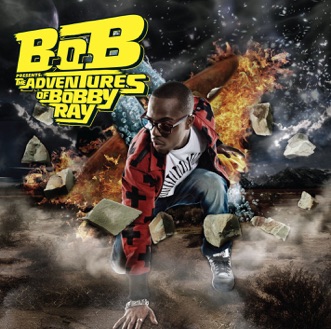