Me and my Crew
J Pre/Wyclef/Jazmine Sullivan/B.Howard Ke Nako Lyrics
We show up to the FIFA World Cup
Conquerers like the
Great Madiba

I come from "Hey"
So you know I love soccer

What do you think Ke Nako song? Can you share your thoughts and listen experiences with other peoples?

JaysawnTheAfrican - Worth the listen, but not proper African

I was only dossapointed with this CD because I live in Africa, and I can honestly say, it doesn't proper reflect the African cultures. It's still a great CD to listen to.

justintran - For those of you wondering about "Wavin' Flag"...

jason.luciana - Disappointed but Still Worth a Listen

I also am disappointed that K'naan's "Waving Flag" was not included on this album, but such is the way of record production and label constrictions. Either way, it's still worth a listen just for the inspiring "One Day" by Matisyahu and "Ke Nako". The album also ends on a quiet, solemn not with "Hope"...this truly is one of the few events that brings the entire world together.

It would have been better with K'naan-Waving Flag, but Viva Africa and One Day are really good to. I don't really fancy Shakira's Waka Waka, but that just my opinion.

vivalaroux17elly1997 - who are these artists anyways??

the only artists i heard of from this list are shakira and pitbull..... but where are all the others from?? i mean really!?! there are great songs out there.... and im surprised that none of them are on here!! what about the 2010 winter olympic album?? there are great songs on there..... but all these songs are about south africa!! i have an idea!! how about we itunes users vote for what songs appear on FIFA world cup albums?? im sure it will be great if we did that....... sheesh! nuff said.

MEIS AWESOMe - K'naan rules this does not

This should have been K'naan's last album (which I bought and everyone should buy) and not this mix up of mediocre songs so this is not worth the trouble.

This album is a great buy. I love the energy; your body wants to move to it without you being conscious of it. It builds on that World Cup fever building and would be a great gym/run companion. Love Waka Waka, One Day, and Game On.

Good but not great

More than worth the $7.99 I shelled out for this album.

ShahdKad3 - What happened to waving flag?

The K'naan song was so much better than all of these songs-Kn'aan waving flag. However the Shakira song is good.

@UyapoNdadi Ke nako ya gore re bonne hore opposition party e tshotseng kana after masisi ke slamber the next president ,so as the youth of this beloved country we need to stand up register 🙏 nd vote when the time comes 🇧🇼🇧🇼. 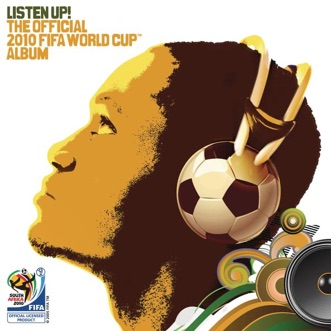