What do you think WAP (feat. Megan Thee Stallion) by Cardi B music videos? Can you share your thoughts and watch experiences with other peoples?

Made for lowest common denominator. Anybody can do this. Is this what we should be holding up as good music. Bad for kids!!!

But the song is garbage but Megan looks absolutely beautiful. THICC AF😍

will work for money - Cardi Cosby

She deserves a cell with bill cosby. Perfect match.

Inappropriate and is so bad worst of our generation. I’ma go listen to something way better this this trash.

Whoever rated it a 1 is a bum and a hater

so almost half of the reviews are 1 star, and most if them are saying the makeup is trash and the video is low budget, so doesnt that means you watched it? After 1 listen you could tell from the lyrics that this is not a clean song. like “park that big mack truck right in this little garage”? you know what that means i mean c’mon people. sorry for the long review btw. i’d appreciate a sub to my channel, snakez fn. ty and cya

I was pleasantly surprised. This is actually a very well-done video. And since this is the "clean lyrics" version, you can't really get on anyone for vulgarity. Unless you intentionally sought out the explicit version somewhere else.

Your not a stripper anymore! You have a great voice when you want to sing. This is just cheap trash

I know the song and if you don’t like it that’s not Apple’s fault. Cardi B even said in an interview that they had wanted something nasty and disgusting.

yeah, it’s a no. cardi b doing the same thing as usual. nothing different.

Trash! This is pornography! Not music

Wow sign me up!! This song is so good literally I can dance to it all the time and don’t listen to those trashy haters they don’t know what they talkin bout’

I think this is kinda disgusting. People saying how great it is that women are sexualizing themselves, but really it’s no better than men sexualizing them. If anything it makes people think it’s ok, but it’s really not. I think that these women should be using their influence on people to promote good things, but that isn’t what’s happening here. I believe they should be respected for their choices, but not supported for bad ones.

nesghfg - Don’t listen to the haters.

They’re just mad these women (queens) get to rap about their own bodies.

It is utterly and outrageously D I S G U S T I N G that this is okay. This. is. NOT. female. empowerment. It is horrid and vile that any artist of any gender would release these words in a song. I have lost all faith in humanity.

All women should be offended...

Love it. See the light side and just have fun with it

Stop it...get some help. This song is absolutely disgusting. Only talks abt sex, nasty. We need uplifting songs. The type of songs Stray Kids make!

Anon a mouse is taken? - Terrible

AyoGrigioBoy - Cardi is back! 🔥😍❤️

Cardi and Megan’s music video for "WAP" is visually stunning (especially the fact that it was recorded during the pandemic, yes everyone got tested) and the song is so catchy!! I love it

I think this song and video is a beautiful expression of female sexuality and liberation. Too many conservatives and religious nuts upset over the female form leaving bad reviews.

Disgusting... spray some bug killer on it.

Notice how she ain’t come up with the camp theme? Who did that? Her idol ms. Minaj. The video looks so tacky and really fake. The sets are really badly animated. Hang it up, flatscreen

Burn it till its all gone - Whyyy

I get what they are trying to go for but what happened to lyricism in rap? This is just cringe material

J*^ - Mind as well show us their choochies too

Wow so low..but what’s new with these so called rappers...

period they completely did that. now thats hardword and respect, yall can hate but yall the same to nonstop have their names in your mouths🤎✨ GIRLBOSSES100%

I think I might be sick, this is disgusting and this is our role models for women I’m disappointed

Bardiganguk - AND THATS ON WAP

Cardi aka Queen of Rap, really made us wait and came back with this legendary BOP for it to break records and make history and is currently number 1 on bb top 100. MEG DID THAT ALSO. STREAM WAP!!!

Nasty and not in a good/cool way! She’s already PAST it, in today’s world there no space for her anymore.... “NEXT..!” All hype and no substance.

Cardi B, everyone wanted you to flop, not happening, you’re killing it again😍😍👑

No video can top this this year! Cardi is back giving visuals as usual!

Have you heard ‘WAP feat. Megan Thee Stallion’ by @iamcardib on #SoundCloud? #np . 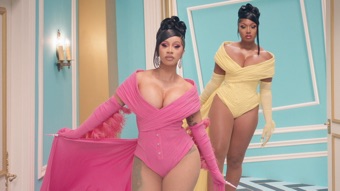