What do you think Good as Hell (Remix) [feat. Ariana Grande] - Single album? Can you share your thoughts and listen experiences with other peoples?

THIS REMIX IS FIRE! Yes you can only hear Ariana for twenty seconds or something but they are both amazing so THEM DOING A COLLAB?!? I mean- y’all’s just jealous she gets to talk to and sing with Ariana 🥱

The Album Rater - Why?

Lizzo just wants to remain relevant after truth hurts. Clearly this was just put together in an attempt to go #1 on the charts. Don’t bother listening.

I like how Lizzo added Ariana to the song because I want it to be more interested in some beats and parts. I like Ariana’s voice, too!

There voices are unique together, which is why I wish Ariana was on the song more. Also if you don’t like the remix, just buy the original.

I know, you think Lizzo is "not talented" and you think Ariana Grande is better than her. Wrong, both of them are talented. Great job on this remix, Lizzo and Ari. 👍🏽❤️

The music is so good and relaxing

How just cause Ariana sang like 5 seconds doesn’t mean she’s in it. ABSOLUTE TRASH

it’s called ‘Good As Hell’ for a reason and for the people rating this song a low rating, please, have any of your songs been big hits? exactly, Lizzo has been going through some enough stuff (enough trolls on twitter), stop throwing hate to this beautiful woman , everyone has up and downs in their career and life but it doesn’t mean shoot em down. She is honestly too good for all of you haters, let her live her life, i mean really. I can listen to this song all day and not get tired. again... this song is ‘Good As Hell’ but y’all out here being Rude As Hell, never say this woman is “talentless” bc have you been able to play at the Grammy’s and actually win one sooooo case closed. y’all need to shut up. Lizzo is a queen. periodt.

Cannolilatte - Ariana was the highlight of this song

Too bad her verse on the song was short.

PurpleAlchemist1 - Fav Version of this Song!!

I wish they played this on the radio! They play the original for sure but I really love this one. I almost wish Ariana was in it more thou because she only sings for a few seconds.

Ariana is such a good singer. Lizzo on the other hand...

I love hearing this on the Walmart commercials.

Ok so first this is an amazing song as the original and if you haters can’t say anything positive about her music well then here is my advice to you, shut up and don’t be rude if you can’t be nice.

ariana is only on this remix so lizzo can get another top 10. don’t put such a talented girl in ariana with a talentless girl in lizzo

SCREW MY OTHER REVIEW! This song is amazing! Keep slaying Ariana!❤️

brezzy peezy - I love this remix!!

Despite the reviews this is an amazing song!! And ari just added something!

BHAD BHABIE is awesome - This amazing

Forget the haters bc this remix is good I love it Ariana did an amazing job on this .

She is a dumb racist feminist who is slowly dying while promoting obesity. She needs to stop with the fat and proud thing. Its gross and she is a terrible musician. She just makes these black woman power songs and sounds corny. Give it up fatty!

Doing anything for another top 10 or #1 hit. Btw the remix is trash.

Love promoting a song for 4 years. Gaga could never

This gurl can’t even sing. Why is she popular ??? She sounds horrible af

This was just unnecessary

Milking as much money as she can out of this song...

Nothing but a cash grab

I don’t know what people see in her. I don’t like her nor her music.

All she wants is charts and she used Ariana ,not good ,boring

Love Ariana but this ain’t it

How can this be #2 on the billboard top 100 and how can this be played on my radio station? Almost as bad as Cardi B. Horrific voice + catchy rhythm = song on the radio. Got it

It's sounds so good with Ari's style. I love the two of you. Please colab again.

the song was okay before but now with Ariana’s silk voice it brings it down to Earth. and i like the ending because it makes you feel close to the artist. i also like the runs in the background while Lizzo sings the chorus. i don’t usually like remixes but this one i heard and immediately bought.

This is so much worse than the original 🙁☹️😕

For the record this is Lizzo song and this is a remix FEATURING Ariana and so it’s technically is Lizzo song so i personally think that she has a great role in the song and I think that the original is better because it has a stronger feeling! But all of you haters u all have terrible taste and have not been educated correctly

It was better with lizzo😐

I always hear this song on the radio and I love it! My best friend says it’s annoying, but how? All these reviews say Arianas voice wasn’t put Into the song enough, but I thought it was the perfect contrast between Lizzo’s intense, funky voice, and Arianas sweet, luluby-esc, voice.

I love this song so much 💞

Brought this song and the payment went through but I can’t play it as it isn’t available in my country. That’s not okay. Paid for something I can’t even access

lizzo needed to give ariana a bigger part

It's a long story - Need something new

Sounds good and their voices sound really good together, however this song has been in the charts for weeks now and I think it seems a bit lazy and desperate to get Ariana on this track at this point. She should have either been in it at the start or they should have made a whole new song together because now we have to listen to the same song on the radio for weeks upon weeks, and see it at the top of the charts again. They sound really good together though, just wish it was something new

anything is good - Fav song

Love this song best song ever!!! Even better with Ariana grande singing in it

Ariana and Lizzo sound great together!🤩🤩

CJ loves tattoos - Liza Koshy got me into this song

Not seeing the hype here

A Big Crybaby - Amazing but..

Although I absolutely love this remix as Ariana Grande is my favourite artist/singer and she's been my idol since 2011. I would've preferred if Ariana's part was slightly extended or she could've sang at least one of the choruses as she makes every song sound 100x better in my opinion, this song is already amazing but that would've made it even better. Obviously from the perspective of somebody who might 'dislike' Ariana this might not be the case but this is just my honest opinion on the remix. As I saw underneath in another review that this song is 3+ years old this makes me think that the company that produced this remix tried to use Ariana's clout/fame to boost this song to number 1 in the charts (which it is currently at number 2) which I think is unfair as Ariana only has a small part in the song but the song still ended up top. If the song had more Ariana in then it would've had a reason to be top but I think this song doesn't deserve a high spot because only about 10 seconds of it is Ariana's part out of about 3 minutes which is boosting the song giving the company more money when that money is coming from Ariana's high amount of fame and Arianators (fans) streaming it many times on all music platforms just so we can make Ariana happy. I have no complaints about the song overall, it's just the amount of time that Ariana shares in the song. Thank you for reading my very long but informative review - Huge Ariana fan since 2011 ♡

The two voices don't match well. The beat is generic. ariana's part is very nasal and edited. Dont like it.

Loose some weight you whale

Desperate last attempt to keep the song in the charts, quite sad tbh

I love this remix, love ari and lizzo and i get that the song is really popular but its 3 years old? Just maybe let it die down and release something new and fresh. It just seems a tiny bit lazy.

MY TWO FAVS COLLABORATING? ITS MORE LIKELY THAN YOU THINK

MrDselenator - Two great artists but why?

I like Lizzo, I LOVE Ariana, but why does this remix exist? It’s a 3 year old song and has clearly only been done to boost its chart performance. And Ariana’s segment is forgettable.

lizzo’s personality is so tryhard and annoying

Such an uplifting anthem.

Lizzo not an ounce of originality in her and ariana grande a generic payola pop girl. YUCK. do not buy this 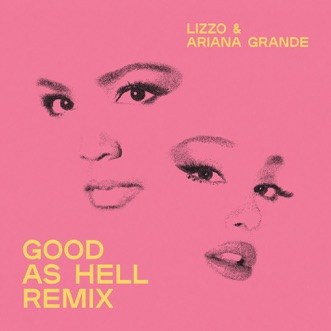