About ASTROWORLD by Travis Scott Album

What do you think ASTROWORLD album? Can you share your thoughts and listen experiences with other peoples?

La flame is a rap genius!!! I love this album but the only songs I don’t like are WAKE UP, CAROUSEL and NC-17 but I love the rest 🔥🔥🔥

AzzaAus1995 - This is what’s wrong with the world

abcdefghujjj - To much auto tune

But respect his getting 💵

Riley phornia - So boring like one good song 69 better

How did Hip hop go from artistic poetic genius’s in the 90’s to this rubbish? How can a genre go from true heart and soul to disgusting soulless noise in such a short time? I guess it’s a reflection of a lot of music today. Real music died at the end of the 90’s early 00’s.

Great album , trav does not disappoint , only thing that lacked a little imo were the quality of some features

Can I be his new wifey?

What is this ? Auto tune rubbish

Stop tryin to be god is fire

R A G E R - DOES NOT DISAPPOINT

this album gets better the more you listen to it. it’s crazy. travis is a genius and astroworld was 100% worth the wait. welcome to astroworld!! 🚀🌏

I love this album and it is definitely worth the price. Every song is amazing and they are so catchy. This is so 🔥

Really good, the wait was worth it ❤️🙌🏽

THIS ALBUM WAS WELL WORTH THE WAIT!! TRACKS ARE ABSOLUTELY AMAZING! MASSIVE SHOUTOUT TO EVERYONE INVOLVED 💯💯🔥

Travis' doesn't put out bad music. This album is a perfect blend of Rodeo, Days before rodeo and Birds. Time and a few listens will ripen your liking of the album, trust me. FYRE

A SICK ALBUM FROM TRAVIS ONCE AGAIN

This album is sick

Without a doubt, the best album of 2018. Beautiful visual and vocals. Can already tell this is a awesome banger/ classic mix💦🔥🔥😃

not usually into rap but this is well done

Another good album by trav,but his best yet..ALL WE NEEDED

Such an amazing album, so fire!!!, l love it, I will be listening to it for the rest of the week straight

I do not understand

So great Like the live event on fort nite

What an album by my boy Travis, the event on Fortnite was fire too!!

Theamazingyubby - One of the greatest albums of the decade

An album with literal meaning behind it, and how Travis grew up in ASTROWORLD Houston, the alternative vibe and sound of the album for example CAN'T SAY and ASTROTHUNDER made Travis Scott easily one of my favourite artists.

PERFECT! BITTSM is still a fav

Best album out in a while

Every song in this album is eye opening and I love how all the songs here are made with other artists. I give it 5 stars.

This is the worst crap I’ve ever listened to, only got clout because of drake P E R I O D

Thisha6 - Album of the year

Travis Scott is one of the most talented auto tune and mumble rappers out there. People think that if you have auto tune then you are automatically bad but Travis Scott heard that and knew how to make it a talent. Previous albums like Birds in the Trap is mostly about dark sides of Travis but this album was very different in terms of its mood. The start of the album was great. First song appealed straight away and it got even better when it got to songs like Sicko Mode and No Bystanders. As we go into the central part of the album with songs like Wake Up and NC-17 were good but not great. Then towards the end with songs like Yosemite and Coffee Bean just ruined it. The beats were on point at the start but bad at the end. It’s as if he’s put the songs in order. Good songs at the start, bad songs at the end. I had been waiting for this album to drop for a while but when I listened to it 3 times and it just got worse after every time. An ok album altogether.

I actually can’t get over how good this album is play it on repeat all the time 😆 saw him at leeds fest this year absolutely killed it , good job Travis

This album was worth the long wait!

Definitely worth the wait 🔥🔥 I thought scorpion was good but this is WAYYYY better. Buttttt, I wish there was a clean version so EVERYONE could listen to it and I can play it in the car with my family🤪 🔭✨

Yay the weeknd is in this album 🖤🖤🖤

sicko mode, can’t say, 5% tint, no bystanders, stargazing, nc-17, Yosemite and who what are the best man Trav killed it

wavez4dayz - Artistry at its finest

Lind L Taylor... - Good but life’s a trip is better

Life’s a trip is better

Load of rubbish. This does not belong in the hip hop category

CurtainSofas - Don’t think it properly lived up to expectations

Felt like there was a lot of overproduction and I’m not keen on the frequent beat switches. Been a fan of Travis since late 2015 so been waiting for this album since before birds! Some tracks show Travis at his best in different ways (COFFEE BEAN, STARGAZING, 5% TINT, YOSEMITE and CANT SAY are my personal faves) tracks like CAROUSEL, SICKO MODE & a few others feel a bit messy and overdone in places. Overall, feel like Travis hasn’t shown us what TRUE fans know he can do - but there are some really solid songs on here and I like how he hasn’t abused the autotune. Was hoping for a classic the way it’s been hyped up over the years, but I don’t feel like I can listen to it all the way through like I can with some albums released this year (TA13OO, Redemption, Daytona, Kids See Ghosts etc) Can tell he put a lot of effort in and you’ve given us some great songs, just KNOW you can do better. Can’t wait to hear what’s next 🎡🎠🎢🌎🌎🌎

With rodeo being a modern trap classic, Travis had a lot to live up to. Birds in the trap failed to live up to expectations, but Astroworld had even higher expectations due to hype considering it has been in production for 3 years (Since Rodeo). As a Travis fan I was worried, but on the first listen I was able to give the album a 9/10, and I’m loving it even more as I listen more. It seems to be a common theme with good music and phenomenal production this year, but it’s been taken to a new level with this album. I was expecting this to be like rodeo, with insane production on dark trap beats, on which Travis became one with (His strongest trait, intertwining him self with the beat). But the beats are all so difference and diverse, but not all over the place, this album takes you on a journey, and Travis still rides the beats like he normally does. The lyrical side of this album (whilst not being great) has been stepped up, with more rapping and Travis giving you a perspective into his thoughts and life, talking about this relationship with Kylie, birth of his daughter, and how he feels on the Kardashian curse... An A-tier album with a strong running in album of the year!

Terrible music by a terrible person

Byte1 - Astroworld, my planet, my home

It wasn’t better than rodeo.... Who lied to us?

Astroworld is the third studio album by American rapper and record producer Travis Scott. It was released on August 3, 2018, through Cactus Jack Records and Grand Hustle Records, and distributed by Epic Records. The album follows his second studio album Birds in the Trap Sing McKnight (2016), and his collaborative album Huncho Jack, Jack Huncho (2017) with Quavo. The album features guest vocals from Kid Cudi, Frank Ocean, Drake, The Weeknd, James Blake, Philip Bailey, 21 Savage, Swae Lee, Gunna, Nav, Quavo, Takeoff, Juice Wrld, Sheck Wes, and Don Toliver, among others. Production was handled by multiple producers, including Mike Dean, Allen Ritter, Hit-Boy, WondaGurl, Tay Keith, Tame Impala, Frank Dukes, Sonny Digital, and Thundercat. The album title is named after the defunct theme park Six Flags AstroWorld, which was located in Houston, Texas prior to its closure. Scott aimed for the album to sound like "taking an amusement park away from kids". He also described the album as a continuation of his debut album Rodeo (2015). Astroworld is a hip hop album, incorporating elements of trap and psychedelic music. The album was supported by four singles, "Butterfly Effect", "Sicko Mode", "Yosemite", and "Wake Up". Astroworld received widespread acclaim and performed well commercially, debuting atop the US Billboard 200 with 537,000 album-equivalent units, of which 270,000 were pure sales. It was certified triple platinum by the Recording Industry Association of America (RIAA). It was nominated for Best Rap Album at the 2019 Grammy Awards, while "Sicko Mode" received nominations for Best Rap Performance and Best Rap Song. The album was named one of the best albums of 2018 and the decade by several publications. 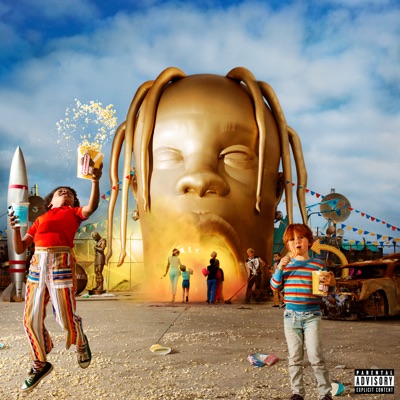