About The Eminem Show by Eminem Album

The Eminem Show is the fourth studio album by Eminem, released in 2002. The Eminem Show was the best-selling album of 2002. At the Grammy Awards of 2003 it was nominated for Album of the Year and became Eminem's third straight LP to win the award for Best Rap Album. It has been certified 8x Platinum by the RIAA, has sold over 9.2 million copies in the U.S., and over 19 million albums worldwide. In 2003, the album was ranked number 317 on Rolling Stone magazine's list of the 500 greatest albums of all time. The Eminem Show was first scheduled for a June 2002 release, however pirated and bootleg copies appeared online on peer-to-peer networks and began surfacing on the streets. Interscope decided to release the album early on May 28 to combat bootlegging. However, many stores in the U.S. began selling it early on Sunday May 26. Despite the confusion over the exact release date, the album still managed to have a wildly successful debut on the charts. The album was met with both critical and commercial success. The record became Eminem's third to win the Grammy Award for Best Rap Album and also swept the MTV Music Video Awards winning four awards for Best Male Video, Video of the Year, Best Direction, and Best Rap Video. The Eminem Show was Eminem's most successful album in terms of charting singles. It spawned two top ten and four top fifteen singles with "Without Me", "Cleanin' Out My Closet", "Sing For The Moment" and "Superman", which managed to reach the top ten without a video counterpart. "Business" was also released as an airplay single but did not chart as high as the others.

What do you think The Eminem Show album? Can you share your thoughts and listen experiences with other peoples?

Eminem is just amazing, he is one of (if not the greatest) to ever do it🔥🔥🔥

The track “Soldier” says it all about Eminem’s lyrical genius.

this man knows what he’s doing, and like the title says he. never. disappoints. periodt.

I used to love Eminem’s music and this album but then I listened more to the lyrics and found that he’s not the best type of music to listen too. I like a lot of the beats and rhymes but he just can’t resist swearing every couple sentences. I understand why fans like this because I used to like it too but now I just don’t like this very much.

This album came When he was At his Peak!!!

Eminem’s last great album, the rest of his discography became awful afterwards. But that doesn’t keep me from loving his older stuff.

Eminem’s best album and this is real rap. The crap they play on the radio today isn’t rap anymore.

I like the ones with peanuts. Sincerely, Joshua Simowski

Toni FGMAMTC - My all time favorite

I love every single song

Best song he ever wrote 😎😎

statsimple69 - Em never has disappointed us.

The old Eminem was so good that he can't beat himself anymore!

Hopkins1188 - Please Go Back To This Style

Wish so much Em would revert back to this style of hip hop. Arguably the best album IMO that he put out

Detroitballer - One of the greatest albums of all time

Read the title about 6.2 billion times.

Mr.funzie - One of the greatest hip hop albums

The legend in his prime

I need some help! - KING

California_Dreamin818 - One of the greatest albums ever made 🐐

Ok this is the real Em. I wish he would had stayed this way with the MM LP and the this he was at the top of his game then he released MM LP2 and that was downhill in my opinion but there were a few good songs on it to be fair. But I am still a fan but I like his older stuff like this. One of his best.

Anyone who says the mmlp is better are so wrong. It’s 2019 and I bought the cd and passed up the mmlp because this album is so good.I can’t find anyway to dislike it.

gabeB123 - Eminem is the GOAT and god and he’s slim shady!

If you wanted shady you got em! This is one of my most favorite albums with Without me, business, till I collapse, sing for your moment and other great songs. This is a 200 out of 10 stars. Eminem is a Rap God

One of the best CD’s ever recorded.

viva ka - Most popular artist ever

Being the greatest of his catalogue, Eminem comes with some serious flows, production, hooks, and features on this perfect album. 10/10.

I will love every piece of art this man puts out the KING !!!

Greatest rap album of all time

l_wayne7m - Best Album Out There

This album is still the best album. Will always be my favorite. Every song could have been released as a single

The best rap album of all time. White America - A good song about the things wrong in the US. 4/5 Business - A catchy and great flowing song. One of my favorites. 5/5 Cleaning out my closet - A diss track on shady’s own mom. Emotional, fantastic. The hook is a little annoying though. 4.5/5 Square Dance - A diss track on George Bush and Cannabis. Very good. 5/5 Soldier - An angry song. Good flow and good hook. 5/5 Say goodbye Hollywood - a good song dealing with the incident of him attacking a bouncer kissing his wife. 5/5 Drips - Disturbing song about... well... 1/5 Without Me - Classic slim shady appearance. A lot like the real slim shady. 4.25/5 Sing for the moment - A great song over the beat of ‘dream on’ by Aerosmith. It’s about the effects of music on his listeners. 5/5 Superman - Absolute truth. Kind of slow though. 3.75/5 Hailie’s song - A joyful song about his daughter. 4/5 When the music stops - Intense song about the difference between music and real life. 4/5 Say what you say - Kind of stupid. But also funny. 2.5/5 Till I collapse - Hype song on tier with lose yourself. 5/5 My Dads gone crazy - a fun song with his daughter. 4/5 Highly recommend. 10/10 album

One of his best. I highly recommend listening to this one.

I’m not the hugest fan of hip hop/rap, but this album’s pretty cool

Imagine hating Eminem. This is his best album next to MMLP2 and MTBMB

Coming off of one the greatest albums hip-hop albums ever was not going to be easy for Eminem. However, he made this album work. Although it isn’t better or as good as the MMLP it’s still great. You see a little less slim in this album and more Em, hence, the Eminem show. From hearing about his relationship with his mother in ‘’Cleanin our my closet” to Em’s relationship with his daughter in “Hailies song” this album came across on a more personal level, along with some political lines on “Square Dance” and “White America,” that bring fairly intelligent points. It’s different, but a good different. You still get glimpses of the controversy especially in the popular “Without me” and “Superman.” Flow and lyrics are consistently solid and the beats are great. Can’t complain at all... except maybe for drips, skip drips, please, it’s the first bad Eminem song in my opinion. Other than that songs I’d really recommend, Till I collapse, White America, Cleaning out my Closet, Sing for the Moment, Superman, Square Dance, they’re all good, except Drips, please no. JV 9.2/10

In my opinion his best album!

You are so much better than drake great amazing album

Godzilla number2 - Without me Eminem

MeliødasAtTheDiscø - Guess who’s back? Back again?

Shady’s back, tell a friend

Eminem is the best

It’s ok but not great

@jaefsus Exactly like the eminem show is such a good album.

@SlimMadrox304 Side B is dope but The Eminem Show is whole other level 😭.

@mikebosports All Eyez on me, Me against the world, The Don Killuninati: The 7 Day Theory. SSLP, MMLP, Eminem Show I can keep going. Docs the Name, Muddy Waters, Malpractice The Coming, Extinction Level Event, Anarchy.

Hi @Eminem The nice people of My Expert Opinion would like to invite you to be a guest on their show at your convenience Many thanks 🙏 @MATHHOFFA @MsDotFit1 @knowledgethagod @Sp8Ghost.

These nobodies is having the strength to show their true colors now after @SnoopDogg did what he did! u didnt say nothing before he became a stabber 🔪@Eminem.

#NowPlaying Cleanin' Out My Closet (Clean) by Eminem The Eminem Show Listen in! .

Where would The Eminem Show rank within 2Pac’s discography? . 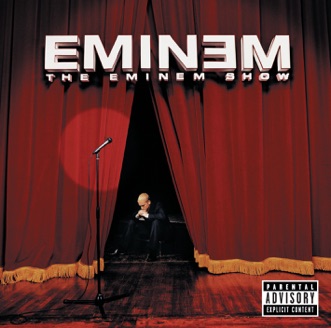